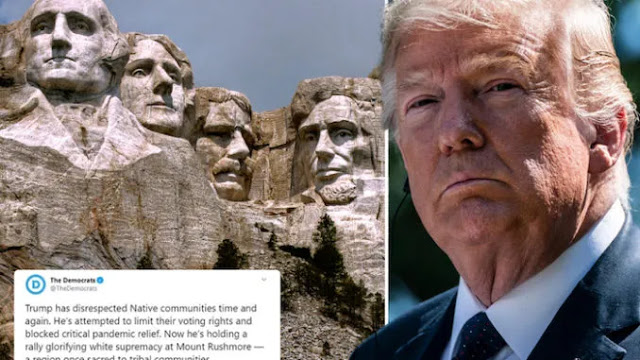 The Democrats’ descent into radicalism reached a new low on Monday when the official Democrat Party Twitter account launched an attack on Mount Rushmore, negatively portraying an upcoming event President Trump is planning ahead of Independence Day at the historic monument to four great American presidents.

Perhaps because of the ferocious response from American patriots, the Democrat Party quietly deleted the disgraceful tweet shortly after posting it.

“Trump has disrespected Native communities time and again,” the Democrats wrote on Twitter in the now-deleted post, with a link to an article in the British leftwing newspaper The Guardian. “He’s attempted to limit their voting rights and blocked critical pandemic relief. Now he’s holding a rally glorifying white supremacy at Mount Rushmore–a region once sacred to tribal communities.”

The Guardian piece goes on to note that Tilsen wants to see Mount Rushmore torn down altogether.

Breitbart report: The push from the Democrats to target Mount Rushmore comes as leftist activists tear down monuments and statues around the country. But the move by the Democrat Party to put the iconic American mountainside monument to four great American presidents–George Washington, Thomas Jefferson, Theodore Roosevelt, and Abraham Lincoln–in the crosshairs by claiming it represents “white supremacy” when it clearly does not may go too far for some voters.

Several on Twitter were quick to rip the Democrats for pushing attempts to destroy Mount Rushmore:

The Democratic Party's plan to run on a "Mount Rushmore is racist" platform was truly innovative. pic.twitter.com/HA0uxwKWUO

Everybody: "Did you see that crazy thing Trump tweeted?"

Trump is set to appear on Friday at the historic landmark in South Dakota’s Black Hills. The fireworks celebration at which the president will speak is limited in crowd size to just 7,500 people, and tickets were awarded by lottery, according to South Dakota authorities.

Last week, Trump signed an executive order protecting monuments from rioters and others who would seek to destroy or tear them down.

“They’re tearing down statues, desecrating monuments, and purging dissenters,” Trump said in a statement accompanying the executive order. “It’s not the behavior of a peaceful political movement; it’s the behavior of totalitarians and tyrants and people that don’t love our country.”

South Dakota Gov. Kristi Noem, in a recent tweet, said she would protect Mount Rushmore from radicals who want to tear it down:

Noem addressed it further in an interview on Fox and Friends last week, saying that this is now about a “radical rewriting of our history.”

“What my message is, is that this is no longer about equality, this is a radical rewriting of our history, and in South Dakota we won’t stand for it,” Noem said. “This is a national monument. The more we focus on the flaws of these men that are on our mountain, the less likely we are to recognize the virtues and the lessons we can learn from their lives. So that really is the message that I have for South Dakotans that love this mountain and Mount Rushmore for this country, that recognize what it represents to us, and we will do all that we can to make sure that that message is loud and clear, that we will make sure that Mount Rushmore stays as majestic as it is today.”