Fauci Ignores His Own Coronavirus Guidances 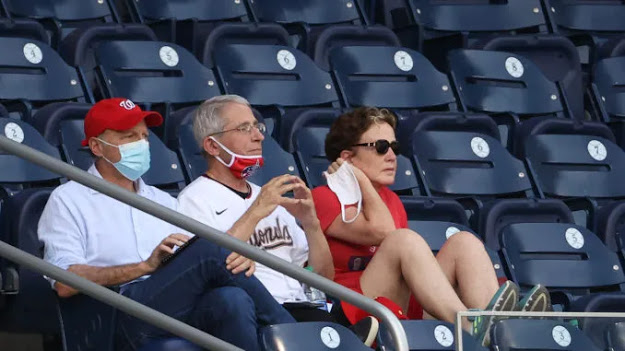 Dr Anthony Fauci has been blasted on social media, after photos emerged showing the top US doctor apparently ignoring the guidelines put in place to stop the spread of coronavirus.

Some people have suggested it’s a case of ‘do as i say, not as i do’

RT reports: Fauci, the director of the National Institute of Allergy and Infectious Diseases and a key player in guiding the US response to Covid-19, enjoyed a pleasant day at the ballpark on Thursday, where he threw the ceremonial first pitch of the MLB opening day game between the New York Yankees and the Washington Nationals.

His throw was wildly off-target, sparking near-unanimous mockery of his baseball skills on Twitter. But he received equally ferocious criticism for his coronavirus etiquette while watching the game from the stadium’s empty bleachers (fans have been banned from attending games, a policy which Fauci strongly advocated for).

Photographs caught Fauci sitting between two people with his mask on his chin. The grinning doctor appears to be having a great time, even though the photographic evidence suggests that he violated his own social distancing and mask-wearing guidelines.

“Showing us all he knows exactly how well masks work! Thanks for the lesson, doc,” quipped writer and former New York Times reporter Alex Berenson, who has repeatedly pointed to studies and data which cast doubt on the efficacy of widespread public mask use.

And there’s Dr. Anthony Fauci showing us all he knows exactly how well masks work! Thanks for the lesson, doc. pic.twitter.com/jdHPzq5HfB

Amazing data here: Mexico, with essentially uncontrolled #sarscov2 spread, has the second-most mask wearing of any country; the Nordic countries, which have almost no transmission, have the least. Canada is well below the US. Because masks work! pic.twitter.com/5y9zJuFYbw

Others argued that Fauci had “made a mockery” of his own recommendations.

When he thinks the cameras are off, Fauci makes a mockery of his "social distancing" recommendations and proceeds to brush off his own mask advocacy.

"Do as I say, not as I do"
h/t @Ronald_Spitzer pic.twitter.com/zeBHLjlZST

The photos even spawned a hashtag, #FauciTheFraud, which accompanies countless posts accusing the doctor of shedding his mask when the cameras are off.

However, some argued that nothing untoward had occurred, as Fauci was sitting next to his wife and one of his friends and would have known if they were at risk.