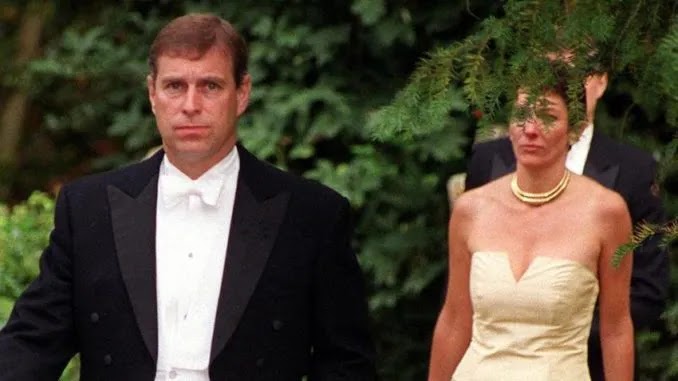 Ghislaine Maxwell has a ‘secret stash‘ of Jeffrey Epstein’s sex tapes featuring his powerful friends and will use the footage as an ‘insurance policy’ to save herself, according to a former friend who explained: ‘Ghislaine has always been as cunning as they come. She wasn’t going to be with Epstein all those years and not have some insurance.’

As the news broke that the FBI busted Ghislaine Maxwell on Thursday for allegedly grooming and raping underage girls with Jeffrey Epstein, fireworks started going off in the lives of certain elite pedophiles who associated with Epstein and Maxwell.

And not the celebratory Fourth of July kind of fireworks.

DailyMail report: Maxwell, 58, was arrested at her hideout in Bradford, New Hampshire last Thursday. She was charged with six federal crimes, including enticement of minors, sex trafficking and perjury.

The British socialite was arguably Epstein’s closest friend and she is alleged to have acted as his madam, accused of securing underage girls for the multi-millionaire, who many believe was running an international blackmail ring that involved elite VIP pedophiles from around the world.

When officials raided Epstein’s Manhattan townhouse after his arrest last July, they found thousands of graphic photos that included images of underage girls and a safe filled with compact discs labeled ‘nude girls‘, according to authorities.

Maxwell’s former friend explained: ‘Ghislaine has always been as cunning as they come. She wasn’t going to be with Epstein all those years and not have some insurance.

‘The secret stash of sex tapes I believe Ghislaine has squirreled away could end up being her get out of jail card if the authorities are willing to trade. She has copies of everything Epstein had. They could implicate some twisted movers and shakers.’

They added: ‘If Ghislaine goes down, she’s going to take the whole damn lot of them with her.’

The former friend continued: ‘Not only did Epstein like to capture himself with underage girls on camera – he wanted to make sure he had something to hold over the rich and powerful men who took advantage of his sick largesse.‘

‘Ghislaine made sure that she socked away thumb drives of it all. She knows where all the bodies are buried and she’ll use whatever she had to save her own a**.’

The day after Epstein’s suicide last August, the New York Times published an account by journalist James B. Stewart who had interviewed Epstein in August 2018.

In the course of their conversation, Epstein told Stewart he had filed away dirt on his famous house guests, ‘some of it potentially damaging or embarrassing, including details about their supposed sexual proclivities and recreational drug use’.

Maxwell’s next court appearance is on Friday in New York. She is currently being held without bail.

An indictment made public last week said Maxwell facilitated Epstein’s crimes by ‘helping Epstein to recruit, groom, and ultimately abuse’ girls as young as 14. It also said she participated in the sexual abuse.

She has previously denied allegations against her.

In asking the judge to deny her bail, prosecutors argued she is a flight risk because she has a vast international network of powerful friends.

Maxwell is undeniably connected to some of the world’s wealthiest and most influential people.

For decades, she has been pictured flitting between society parties in New York City and London, posing with actresses, models and tech tycoons, including Elon Musk and Naomi Campbell.

She was so close with former President Bill Clinton, who flew multiple times on Epstein’s infamous Lolita Express, that she attended the wedding of his daughter Chelsea in 2010.

But one of Maxwell’s closest friends is Britain’s Prince Andrew, pictured at his side throughout the years.

In a recently uncovered photo, she posed with disgraced actor Kevin Spacey on Queen Elizabeth and Prince Philip’s thrones during a private Buckingham Palace tour organized by the Duke of York.

She was also smiling in the background of a photo taken at her London apartment, where Prince Andrew posed with his hand around the waist of teenager Virginia Roberts Giuffre.

The then-minor claimed she had sex with Prince Andrew under the direction of Maxwell and Epstein. Andrew has vehemently denied all claims against him.

Maxwell’s high-flying lifestyle came crashing down when the FBI found her hiding out at her $1 million home in the quiet town of Bradford, New Hampshire last Thursday.

She bought the property in December for $1 million cash, using a company that reportedly has ties to her wealthy lover Scott Borgerson.

Federal prosecutors said Maxwell had been hiding in New England since last July, when Epstein was arrested. Last summer, DailyMail.com tracked her down to the Manchester-by-the-Sea waterfront home of tech CEO Borgerson.

She changed her phone number to one registered under ‘G Max,’ changed her email address, moved at least twice and when she ordered delivery packages had them delivered under a different name.

A grand jury returned a sealed, six-count indictment against Maxwell on June 29, almost a year after Epstein was charged.