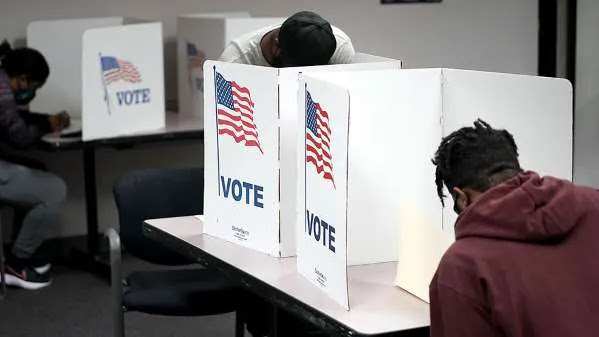 Nevada Republicans say they have uncovered more than 3,000 instances of criminal voter fraud and are demanding an investigation from the Department of Justice.

The Nevada Republican Party on Thursday announced that its legal team had asked Attorney General William Barr to investigate what they called “criminal voter fraud” in the state.

“Our lawyers just sent a criminal referral to AG Barr regarding at least 3,062 instances of voter fraud,” the Nevada GOP said on Twitter. “We expect that number to grow substantially. Thousands of individuals have been identified who appear to have violated the law by casting ballots after they moved from NV.”

Our lawyers just sent a criminal referral to AG Barr regarding at least 3,062 instances of voter fraud. We expect that number to grow substantially. Thousands of individuals have been identified who appear to have violated the law by casting ballots after they moved from NV.

Nevada law limits the people who can vote after leaving the state to students as well as service members or their families, according to The Washington Post.

“Of course, voter fraud is a serious federal felony, one that cuts to the heart of representative democracy” said the letter, which was shared on Twitter by Tim Murtaugh, communications director for President Donald Trump’s campaign. “We understand that these are serious allegations and we do not make them lightly.”

WesternJournal report: In a separate letter to a lawyer representing Clark County, which includes Las Vegas, the Republican Party said it expects the list of those who voted after leaving the state to reach about 6,000 names.

Nevada Republicans further noted that they had identified instances of people under age 18 casting mail-in ballots.

Father of a 17 yo who registered & received ballot thankfully contacted county re: his ineligibility…

Gov. Steve Sisolak, a Democrat, pushed back against the allegations and said he had “the utmost confidence in the abilities of Nevada’s local election officials and Secretary of State Barbara Cegavske to accurately count every eligible vote cast in the Silver State,” according to Fox News.

“Our election administration officials are required to keep counting under state law and that is exactly what they’ll do until every vote is counted. Despite national pressure, our election officials and public servants continue to prioritize accuracy and fairness in this process. That should make all Nevadans proud,” Sisolak said.

“I ask all Nevadans to support our election workers, trust this process and respect the results when they are certified as final,” he said.

Separately, Nevada’s Republican congressional candidates filed a lawsuit against the state, saying its vote-counting system was flawed, according to the Washington Examiner.

“Irregularities have plagued the election in Clark County, including lax procedures for authenticating mail ballots and over 3,000 instances of ineligible individuals casting ballots. Ballots have even been cast on behalf of deceased voters. Moreover, the public has often been prohibited from observing the processing of mail ballots, resulting in much of their work being done in the shadows without public accountability,” the lawsuit said.

In a news conference Thursday night, Trump said his administration was working to “protect the integrity of our very important 2020 election,” according to a White House media pool report.

He said the spectacle of the ongoing, challenged vote count proved his point about mail-in voting.

“I’ve been talking about mail-in voting for a long time,” Trump said. “It’s really destroyed our system. It’s a corrupt system. And it makes people corrupt even if they aren’t by nature, but they become corrupt; it’s too easy. They want to find out how many votes they need, and then they seem to be able to find them. They wait and wait, and then they find them.