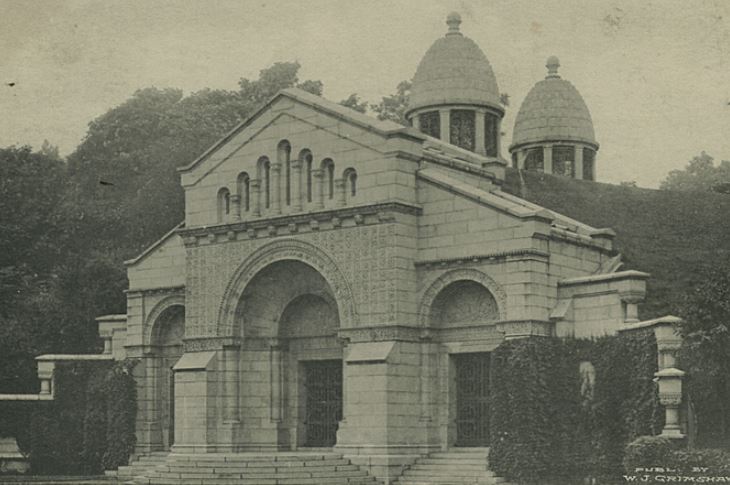 Located on the famously haunted Staten Island in New York, the Moravian Cemetery is “one of America’s most beautiful burial parks.”

It covers over one hundred acres, and is the property of the Moravian Church of Staten Island. Valleys, lakes, stunning architecture, and beautiful gardening give the place a serene, peaceful feel…until you stop by the Vanderbilt tomb.

Cornelius Vanderbilt, at the early age of sixteen, had dropped out of school and started his own ferry business. He became a millionaire long before his death, and donated about twelve acres to the Moravian cemetery. (It’s been estimated that he was worth about 167.4 billion dollars at his life’s end.)

Later, Cornelius and seven other members of his family were buried in the legendary Vanderbilt tomb. Separate from the rest of the cemetery and built right into a hill, the tomb is at least three stories high and took Richard Morris Hunt over a year to design and build. In fact, it is the largest and possibly most decorative private tomb in the country.

Also standing is a giant wrought-iron gate that has been permanently locked and stood upright, due to the death of a young woman visiting the cemetery many years ago. Upon trying to open the gate, it fell on the woman…killing her instantly. As a result, there have been sightings of glowing light resembling a girl with long, flowing hair.

Not surprisingly, the same sneaky teenagers who reported seeing the woman managed to get scared out of their minds two more times. The first night, they were near a group of small tombstones when they heard a baby’s shrill cry and panicked.

The third time, the group had made it as far as the gate and the Vanderbilt tomb. But upon turning around, they realized they had a visitor. A man in a suit was standing right next to him, but vanished almost as soon as they noticed. The friends ran hysterically for their lives, and never came back again.

Perhaps the most famous thing about the Vanderbilt tomb are the photos taken in that area. Many visitors have claimed that, once the film has been developed, the people who posed in the photo aren’t there anymore…..or, even more disturbing, sometimes extra people appear.

A lot of pictures have also revealed orbs, bright lights and lines, blurred faces, and even floating, disembodied heads.

Not unlike the lady being crushed by the fence, Vanderbilt tomb is also known for the many freak accidents and deaths that have occurred in its vicinity. However, the Moravian Cemetery has recently increased the security due to the amount of trespassing.

This has probably reduced vandalism issues, but the supposed haunting remains just as active. The tomb is opened for Vanderbilt’s descendants every four years or so, and there are always mysterious noises surrounding anyone who visits. It’s also been said that if someone bring flowers for any of the graves, a gray suited man will attack and chase them away.