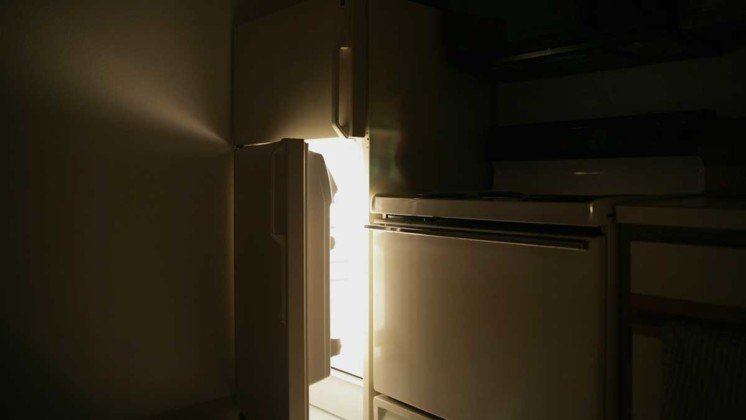 So-called Ice Box Murders of Fred and Edwina Rogers, an elderly couple living in Montrose, may be one of the strangest cases yet.

On June 23, 1965, Edwina’s nephew Marvin became concerned about the couple when his phone calls to his aunt went unanswered. Marvin asked police to check in on the couple, who complied.

When police responded, they found the house locked, but forced their way in. Food had been left on the table, which somehow led to the officers checking inside the fridge.

What they found – numerous cuts of “washed, unwrapped meat” was neatly stacked on the shelves – which the officer thought came from a butchered hog, didn’t seem all that out of the ordinary.

But as the officer went to shut the door, he saw the Rogers’ heads staring back at him. They had been stashed in the vegetable crisper. That “meat” turned out to be the Rogers’ legs and torsos. 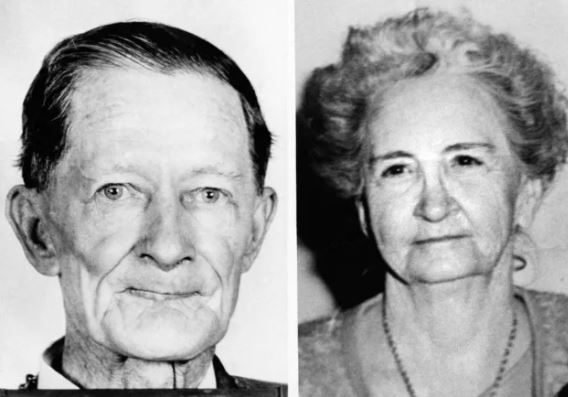 Fred and Edwina Rogers, murdered in their home on Father’s Day, 1965.

Investigators said that a claw hammer had been used to beat Fred to death, and both of his eyes had been gouged out. Police determined that Edwina had been shot in the head, and both had been hacked into pieces in the bathroom. The house was eerily devoid of blood, and appeared to have been thoroughly cleaned.

Stranger still was that their sex organs had been thrown in the sewer outside of the house, and that other missing body parts were never recovered. Also, there was the 43-year-old unemployed hermit son, Charles Frederick Rogers, who apparently lived with his parents in an attic bedroom but whom neighbors didn’t recall ever seeing.

The only drops of blood in the house led to the son’s attic room, and a bloody keyhole gave more of a hint as to what was to come, but when investigators entered, no Charles. In fact, he just disappeared, and was declared legally dead in 1975, ten years after the murders. 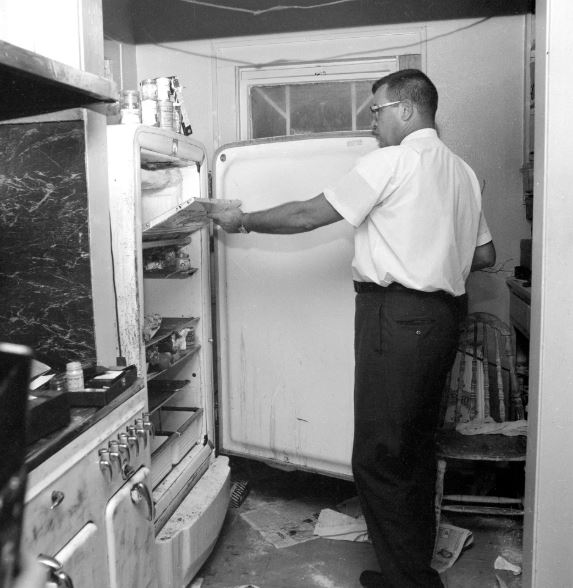 An investigator examining the icebox where the bodies were found. The home itself was eventually torn down, and the site is now occupied by condos.

In 1992, the authors of the book The Man On the Grassy Knoll theorized that Charles was a CIA agent who was involved in the assassination of President John F. Kennedy.

According to their work, Rogers was a CIA agent who likely impersonated Lee Harvey Oswald in Mexico City and, along with Charles Harrelson, was one of two shooters involved in the assassination of President John F. Kennedy.

There’s no telling who Charles actually was, considering he communicated with his parents only by writing notes that were slipped under the door and didn’t appear to interact with any other actual human beings ever.