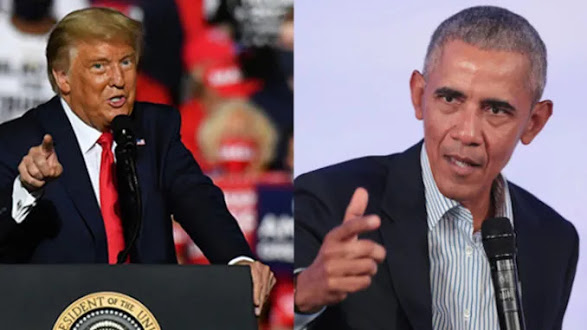 Obama also attacked Trump on his coronavirus response, declaring “We literally left this White House a pandemic playbook,” adding “They probably used it to, I don’t know, prop up a wobbly table somewhere.”

Summit.news reports: Trump hit back at Obama during a rally in North Carolina, telling the huge crowd “You know Obama’s now campaigning. Oh, here we go.”

Referring to him as ‘Barack Hussein Obama,’ Trump said his predecessor had “refused to support Biden,” up til now.

“There was nobody that campaigned harder for Crooked Hillary Clinton than Obama,” Trump added, noting “He was all over the place.”

“The only one more unhappy than Crooked Hillary that night was Barack Hussein Obama,” Trump boomed.

Trump also revisited a past interaction with Obama, when the media erroneously claimed that the crowd for Trump’s inauguration was smaller than for Obama’s.

Trump noted that when photos of the two events were compared by the media “they show empty space and they show Barack Hussein Obama’s.”

“They took the pictures about five or six hours,” after the event, Trump said, noting that “When I was speaking it was packed.”