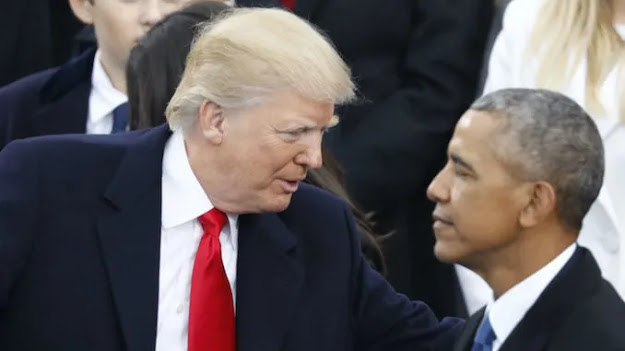 President Donald Trump has smashed Barack Obama’s popular vote record set 12 years ago, paving the way for Trump to run again in 2024 if he loses the election.

The Democrats promoted the 2020 election as a referendum on Trump’s first term, baselessly accusing him of mismanaging the coronavirus pandemic. They also tried to impeach him on top of 24/7 negative media coverage about his policies, his character, and his conduct.

But their dirty tricks didn’t work.

Newsweek.com reports: So hostile was the political, economic and media landscape that many forecasters and pundits talked of Trump being rejected in a landslide. The fact that Trump has managed to attract even more votes than he did in 2016 against such overwhelming odds will reinforce the case for another presidential run should he lose his battle to remain in the White House. Only one president has been elected to a second non-consecutive term: Grover Cleveland in 1893.

According to a recent poll, many Republicans would support Trump trying to win another term in 2024. The Washington Examiner/YouGov poll of 1,200 registered voters surveyed October 30 asked respondents what they would prefer Trump to do should he lose.

Across all those asked, the most popular choice was for him to “leave politics entirely,” with 48 percent suggesting this.

However, among Republicans, the most popular answer was for Trump to stay in politics and run again for president in 2024, with 38 percent of those asked opting for that choice.

And Trump’s former campaign adviser has suggested the president will run again in four years if he loses to Biden.

Bryan Lanza, who served as deputy communications director on Trump’s 2016 campaign, said the president still enjoyed widespread support among Republicans and would encounter little opposition from within the party if he decided to run in 2024.

“He has got the apparatus, he has got the support. If he were to lose a very tight election today, he can make the claim that it wasn’t a fair and free election, the media interfered with their suppression polls, you’ve had the rules change, you’ve had ballots appear, and I think he can make a strong case to run again and I think the Republicans would step aside and let it happen,” he said during an interview with the BBC.

Put to him that U.S. voters have not seen the end of “politician Trump,” Lanza replied: “Correct.”

“If anything is clear from the election results, it is that the president has a huge following, and he doesn’t intend to exit the stage anytime soon,” former Republican Senator Jeff Flake of Arizona told the New York Times.

Trump’s allies also might point to the closeness of the election, despite numerous polls pointing to Biden holding a strong lead, coupled with the president making gains in a number of demographics, as reason why he could still be competitive as a presidential contender in 2024.

Sam Nunberg, who was a strategist on Trump’s 2016 campaign, told the New York Times, “President Trump will remain a hero within the Republican electorate. The winner of the 2024 Republican presidential primary will either be President Trump or the candidate who most closely resembles him.”

Turnout in the 2020 election was estimated to be the highest since 1900.

But despite more people voting for Trump in 2020 than Obama in 2008, he still is almost certain to lose the popular vote for the second election in a row. In 2016, Hillary Clinton won the popular vote by almost 3 million but still lost to Trump in the Electoral College. She received 48.2 percent of all votes cast compared to Trump’s 46.1 percent. But the Electoral College votes went to Trump, 304 to Clinton’s 227.