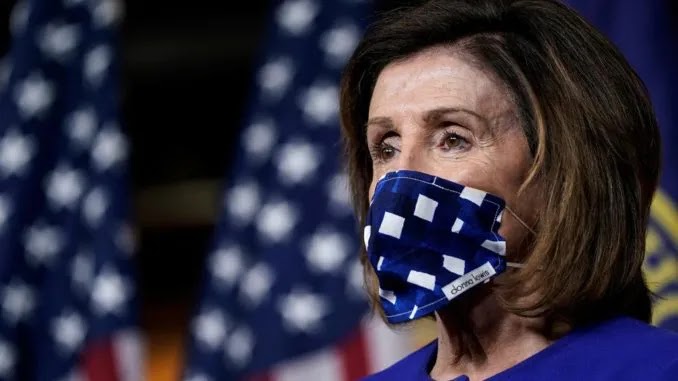 House Speaker Nancy Pelosi has reportedly told committee chairs to enforce members on their panels to wear face masks during proceedings amid the coronavirus pandemic.

Breitbart reports: Attending Physician Brian Monahan in a recent memo touted the effectiveness of masks and stated that “in a limited enclosed space, such as a committee hearing room, for greater than 15 minutes, face coverings are REQUIRED.”

According to the Hill, the guidance was “requested” by the Speaker, who has reportedly asked committee chairs to enforce the rule.

“This requirement will be enforced by the Sergeant at Arms and noncompliant members will be denied entry,” a senior Democratic aide told the Hill, adding that lawmakers are free to attend hearings virtually.

Pelosi’s enforcement coincides with her string of criticisms of the president, who has received backlash from progressives and establishment media outlets for opting to resume his rallies. Many of the politicians and outlets criticizing him have, notably, praised protesters who have taken to the streets by the hundreds — and in some cases thousands —  in recent weeks.

“I have three words to say to the president on that: science, science, and science,” Pelosi said during a Tuesday appearance on MSNBC’s Deadline: White House.

“Science to not gather people in large numbers, in close proximity, without masks. [It’s] a dangerous thing at the time of a pandemic,” she added.