The Creepy Case Of The Russian Vampires Of WWII 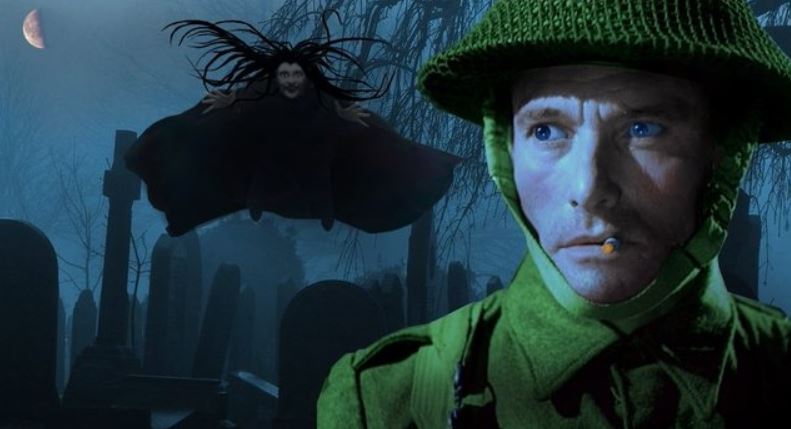 This is a story from the dark days of World War Two, and researcher and writer Tom Slemen cannot explain the strange incident described within this tale.

In the early hours of Friday 31st October 1941, a 55-year-old private in the Home Guard named Ken was patrolling the area around Stanley Park when he saw a figure on a bicycle coming towards him down Priory Road. It was an old friend nicknamed “Jegger” – a tough nut, the same age as Ken.

He had fought in the last lot – World War One – and had served in India and France with the Seaforth Highlanders. He had sustained some terrible injuries in the previous war and despite having had part of his foot amputated, he was an able rider and a very valuable member of the recently formed Home Guard Cycling Patrol.

Ken gave Jegger his last cigarette and asked him what he was doing in the North End, for Jegger was based at Wavertree Town Hall. ‘Some clown said they saw gliders flying low over Stanley Park, and they sent me up to have a look, just in case,’ Jeggers replied with a lopsided smirk.

One of the many duties of the Home Guard was to patrol wide open spaces such as Stanley Park where German paratroopers or enemy gliders could land. Just the other day there had been a panic after several people swore they had seen a German warship arrive in the Mersey. People were so afraid of an invasion, they were starting to hallucinate Nazi invaders everywhere.

‘Well, there must be some communication problems down in Wavertree, Jegs,’ said Ken, ‘because I was sent round here for the same reason, and all I’ve seen so far is a scruffy-looking owl in Anfield Cemetery. Get home, lad, get some kip.’

‘I think I will, Kenny,’ Jegger replied, and as he cycled off he shouted, ‘We must have a few jars in the Jolly Miller one night!’ to which Ken replied, ‘The Jolly Miller got bombed! It’ll have to be the Coffee House up by you in Wavo!’

Ken glanced up at the waning moon in its last quarter hanging in a starry sky, and then his gaze fell down to the welcoming sight of a cocky watchman sat in front of an incandescent brazier, overseeing roadworks at the Walton Lane end of Priory Road.

Ken recognised the old watchman as 70-year-old Harold Mackintosh, a hod-carrier on every building site Ken had worked on in his younger days. The two men got chatting, and Ken shared some of the Irish stew that had been bubbling in a can on the brazier, and Mackintosh also gave him a few rounds of barley bread to toast.

Ken mentioned the so-called Nazi gliders that had been reported over Stanley Park, and old Mackintosh reacted strangely. He gave a knowing nod and said, ‘It’s no glider Ken, but there’s something flying round here at night because I’ve seen it with my own eyes mate.’

‘You’re pulling me leg,’ said Ken, smiling as he took a sidelong look at the watchman. ‘As true as God’s in Heaven, Ken,’ Mackintosh solemnly insisted with a nod of his head. He opened a tobacco tin, took out a single rolled cigarette and carefully broke it in two. He offered one half to a grateful Ken and said, ‘Whatever it is, it comes from over there.’ And he nodded towards Anfield Cemetery.

‘It’ll be that owl, Mack,’ said Ken with a nervous laugh, but Mackintosh was deadly serious when he replied, ‘It must be an owl with a six-foot wingspan then, and it’s a got a bit of white to it – like a face – honest.’

‘What was that?’ Ken asked and thinned his eyes. ‘Listen!’

‘I’m going a bit mutton jeff,’ said Mackintosh, ‘what is it?’

‘Oh yeah, I can hear her,’ Mackintosh gave a puzzled look and whispered, ‘Sounds more like crying than laughing though.’

‘It’s coming from the other side of the park, on Anfield Road,’ was Ken’s estimation, ‘and it’s getting nearer.’

Screeching laughter was suddenly heard above the treetops of Stanley Park, and a dark, fluttering shape passed overhead, passing in front of the waning half moon! It swooped down towards the cemetery, then curved – and headed straight towards the two men.

As Ken quickly pointed the barrel of his Lee-Enfield rifle at the thing attacking him, he saw it had the face of a smiling woman with reflective eyes like that of a cat. The hair of the flying entity seemed to writhe like the venomous snakes in the head of Medusa, and the black cloak trailing it billowed.

Ken blasted the face with the first round – and the rifle’s .303 was designed to be brutal to flesh. The second shot hit the body of the thing and it emitted an ear-piercing scream and smashed into the park railings. Ken fired two more rounds into the strange creature, but it ran off up Priory Road – then took off into the night sky.

‘Did you see its teeth?’ Mackintosh repeatedly asked a stunned Ken, who finally said, ‘No.’

‘She had huge teeth, all pointed,’ said Mackintosh, ‘didn’t you see them?’

‘No!’ snapped Ken, ‘I was too busy trying to shoot the damned thing!’

Mackintosh deserted his duty and left the roadworks, never to return, and when Ken got back to his HQ he had to account for four missing rounds.

He told his captain what had happened and expected to receive a severe reprimand for recounting what sounded like such an unbelievable story – but the captain said another Home Guard soldier from the Wavertree division had also fired upon something ghastly that he had seen over Anfield Cemetery, and Ken realised the captain was referring to his friend Jegger.

Just what the fanged thing was which swooped down on Ken and his friend that Halloween night is unknown, but for decades a rumour has persisted that a Russian vampiress was entombed in the catacombs under Anfield Cemetery. Most people are not aware that there are four blocks of catacombs 25 feet beneath the cemetery, modelled on the ones in Rome.

When a Russian nobleman was visiting Liverpool over a hundred years ago, his wife died and he had her put in a specially constructed coffin which was deposited in the Anfield Catacombs.

The nobleman said he had to return to Russia, but that he would come back and build a church dedicated to the memory of his wife in Anfield Cemetery – but he was never heard from again – and his wife’s hermetically-sealed coffin was left on a stone shelf in the catacombs. There are twenty coffins in the catacombs to this day, and the vampiric rumours surrounding the Russian nobleman’s deceased spouse have long died down…