Trump Authorizes Feds To Arrest Anyone Vandalizing Statues, Warning They Face Up To 10 Yrs In Jail 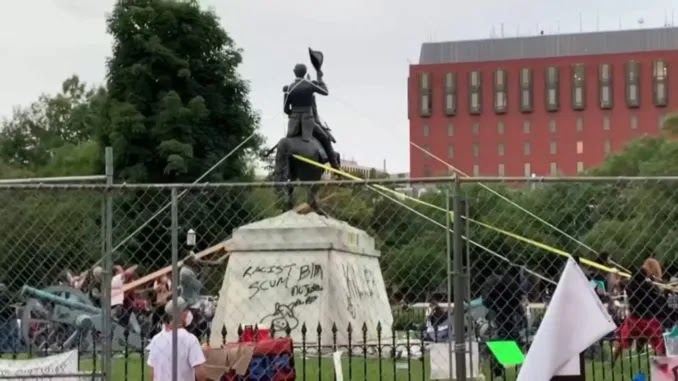 President Trump has authorized law enforcement to arrest anyone who who trys to tear down or vandalize statues and other landmarks on federal property.

He said the “vandals, hoodlums, anarchists and agitators” responsible could be jailed for 10 years.

Trump said that the new order is effective immediately and also applies “retroactively” so those who previously participated in bringing down memorials could be arrested.

RT reports: The US president wrote on Twitter that he would no longer tolerate the destruction of federal property.

“I have authorized the Federal Government to arrest anyone who vandalizes or destroys any monument, statue or other such Federal property in the U.S. with up to 10 years in prison, per the Veteran’s Memorial Preservation Act, or such other laws that may be pertinent,” he said, adding that his instructions would be implemented “immediately” and may also be used retroactively to prosecute vandals.

“There will be no exceptions!” he warned.

.....This action is taken effective immediately, but may also be used retroactively for destruction or vandalism already caused. There will be no exceptions!

Trump had earlier hinted that protesters who attacked a statue of Andrew Jackson, located across from the White House in Lafayette Park, could face years in prison. He said similar punishments could be imposed on those who vandalized the historic St. John’s Church.

Police intervened and dispersed the protesters as they attempted to pull down the Jackson statue on Monday. The statue, as well as the nearby church, was tagged with graffiti.