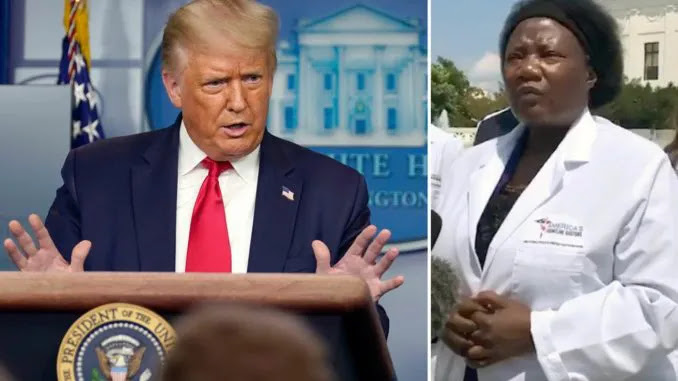 President Trump has doubled down on the efficacy of hydroxychloroquine to treat the coronavirus after sharing a viral video which has now been deleted.

Trump said he didn’t know why Twitter and Facebook decided to remove the video that showed a group of doctors making claims about the virus.

His son Donald Trump Jr was temporarily suspended on Twitter earlier on Tuesday after sharing the video.

“I wasn’t making recommendations” the president said during a coronavirus briefing about the tweet he shared, adding “It’s recommendations of many people, including doctors. Many doctors think it’s extremely successful, the hydroxychloroquine, coupled with the Zinc and the perhaps the azithromycin”.

The Independent reports: He complained that the debate around those drugs has become “political”.

“I took it. I’m here,” he said of hydroxychloroquine. “I think it works in the early stages.”

Medical experts and his own government have said there is no factual or scientific data to back up his claims.

He said unnamed “frontline medical workers … believe in it”.

The president ended his latest briefing after about a half hour, and only 11 minutes of questions from reporters.