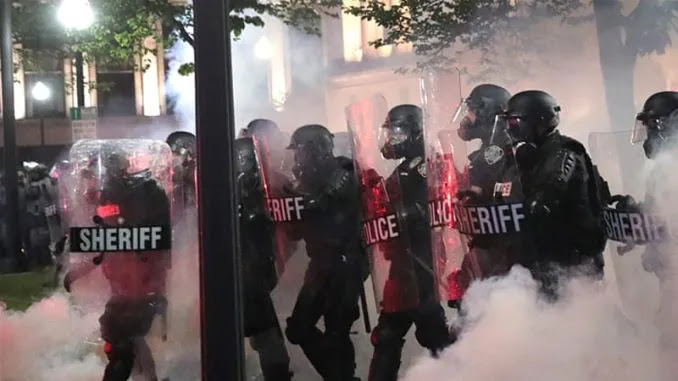 Protesters took to the streets in Kenosha for a fourth night on Wednesday, defying a 7pm curfew that has been put in place until Sunday.

Previous nights have seen vilence and unrest escalate later in the evening and into the following morning. According to CNN however, the ‘protests’ have been “mostly peaceful”!

RT reports: “President Trump condemns violence in all forms and believes we must protect all Americans from chaos and lawlessness,” White House Press Secretary Kayleigh McEnany said in a statement on Wednesday night. “This is why he is encouraging Democrat governors to request the National Guard and federal law enforcement to augment their local law enforcement efforts.”

“We have assisted Wisconsin in the deployment of almost 1,000 National Guard and over 200 federal law enforcement personnel, which will include FBI and US Marshals“

From the White House: pic.twitter.com/gDNNyZWkCI

While Wisconsin Governor Evers said earlier on Wednesday that he would expand the Wisconsin Guard deployment in Kenosha from 250 to 500 troops, he made no mention of federal forces. The White House missive later clarified that 200 federal officers and nearly 1,000 Guardsmen from other states would join them, soon after the Department of Justice confirmed that the federal agents would be drawn from the FBI, ATF and US Marshal Service.

Hours after Evers’ statement announcing the expanded Guard presence, President Donald Trump said he had spoken to the governor, noting that he had “agreed to accept federal assistance,” though did not offer details on the deployments at the time. It is unclear if the federal initiative was spurred by a request by the Kenosha County Board earlier in the day, which had pleaded with Evers to send a total of 1,500 Guardsmen.

Unrest kicked off in Kenosha on Sunday, seeing protests over the police shooting of African American man Jacob Blake spiral into three nights of riots, looting and arson. While destruction was less widespread on Tuesday than the night prior, a dispute between protesters and those attempting to protect property ended in gunfire, leaving two dead. The 17-year-old suspect in the shooting has been taken into custody and charged with homicide.