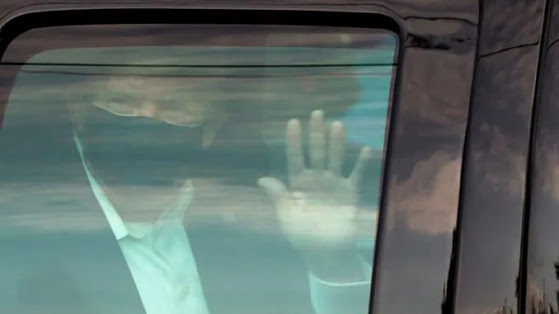 President Trump has sent the mainstream media and others into a frenzy after he made a surprise visit to supporters outside Walter Reed hospital on Sunday.

Critics have called the stunt ‘insanity’ and say it proves that he still isn’t taking the coronavirus seriously.

CNN’s Maeve Reston who called the incident a “photo op” said the White House’s handling of Trump’s Covid-19 diagnosis and subsequent treatment was “a textbook example of how not to handle a deadly virus.”

Not everyone felt the same way however….Britains former UKIP leader Nigel Farage noted that no other Western leader would have made such a visit to the crowds outside his hospital. “This is why the American people love Trump,” he said. “He will be back better than ever.”

No other Western leader would go and visit the crowds outside their hospital like this.

This is why the American people love Trump.

He will be back better than ever. https://t.co/M0ahZAWhIG

A White House spokesman said the drive-by “was cleared by the medical team as safe to do”, adding that precautions were taken, including using personal protective equipment.

RT reports: The White House press pool was already cranky on Sunday, after Trump’s doctors and his chief of staff, Mark Meadows, gave apparently conflicting information on the president’s condition on Saturday and failed to disclose that he had been treated with supplemental oxygen on Friday.

Sunday’s press briefing was more detailed, but reporters were hit with what CNN called “jarring” information: statements by Trump’s doctors saying his condition was improving to the point that he will be released from the hospital as soon as Monday.

But the real kicker was Sunday’s late-afternoon visit to a large crowd of demonstrators who had gathered outside the hospital to show their support for the president. Trump tweeted a video from Walter Reed saying he wanted to “pay a little surprise” to the “great patriots” out on the street.

A black Chevrolet Suburban carrying Trump passed close to a security fence, behind which supporters waved flags and cheered for him. Trump, wearing a mask, waved to the crowd from inside the vehicle as he passed by.