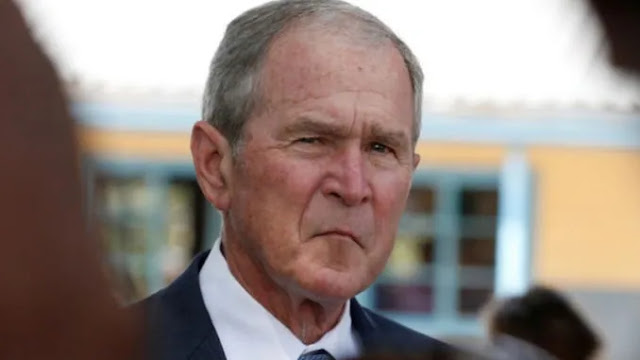 Former President George W. Bush has declared that he will not support President Trump’s re-election this November, joining other Republican traitors such as Mitt Romney in undermining Trump’s efforts at securing a second term.

George W. Bush’s wars across the Middle East cost the lives of at least 480,000 victims including thousands of Americans.

Former President George W. Bush won’t support the re-election of Mr. Trump, and Jeb Bush isn’t sure how he’ll vote, say people familiar with their thinking. Senator Mitt Romney of Utah won’t back Mr. Trump and is deliberating whether to again write in his wife, Ann, or cast another ballot this November. And Cindy McCain, the widow of Senator John McCain, is almost certain to support Mr. Biden but is unsure how public to be about it because one of her sons is eying a run for office.

Former Republican leaders like the former Speakers Paul D. Ryan and John A. Boehner won’t say how they will vote, and some Republicans who are already disinclined to support Mr. Trump are weighing whether to go beyond backing a third-party contender to openly endorse Mr. Biden.

Breitbart.com reports: In a statement to the Texas Tribune, a spokesperson for Bush denied the Times‘ report, saying: “This is completely made up. He is retired from presidential politics and has not indicated how he will vote.”

Bush, who has largely avoided politics since leaving office in 2009, has recently weighed in on the Chinese coronavirus pandemic and the death of George Floyd — and while neither statement mentioned President Trump by name, they were regarded as veiled swipes at his handling of both matters.

In May, Bush published a video message urging for unity and togetherness amid the outbreak, saying Americans are all God’s children and deserve equal treatment.

“[L]et us remember how small our differences are in the face of this shared threat,” he said. “In the final analysis we are not partisan combatants, we are human beings equally vulnerable and equally wonderful in the sight of God. We rise or fall together, and we are determined to rise.”

Shortly after, President Trump hit back at Bush with a reminder that the former president failed to defend him during his impeachment trial, saying: “He was nowhere to be found in speaking up against the greatest Hoax in American history!”

On Tuesday, Bush, along with the former first lady, Laura Bush, said in a statement that they were “anguished by the brutal suffocation of George Floyd and disturbed by the injustice and fear that suffocate our country.”

The group, named 43 Alumni For Biden, lists Kirksey as its custodian of records and group’s treasurer.