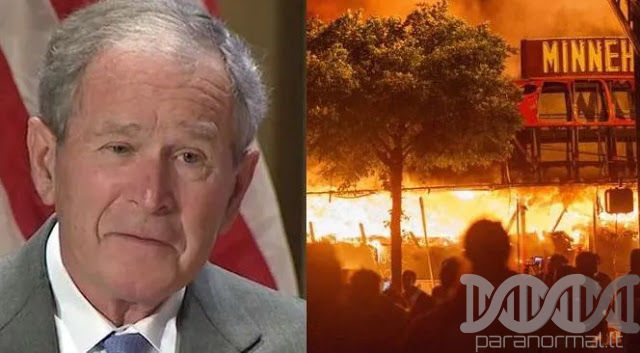 Former President George W. Bush has praised the “protesters” who he says are marching for “a better future” and “lasting peace“ while hundreds of cities across the country are engulfed in chaos and organized destruction.

Bush said that he and former first lady Laura Bush were anguished by the death of George Floyd and disturbed by what they’ve seen since, chiming in on the side of legitimate protests, in what many are seeing as another rebuke at President Trump.

‘It is a strength when protesters, protected by responsible law enforcement, march for a better future,‘ Bush said.

‘But we also know that lasting peace in our communities requires truly equal justice,’ the ex-president said.

He added that ‘looting is not liberation, and destruction is not progress.’

Bush started out the statement by explaining his reluctance to release one.

He and the former first lady, he said, ‘resisted the urge to speak out, because this is not the time for us to lecture.’

But Bush also said it was time for the country to examine it’s ‘tragic failures.’

That way, he said, the country could find its ‘redeeming strengths,’ which among those was peaceful protests.

‘This tragedy — in a long series of similar tragedies — raises a long overdue question: How do we end systemic racism in our society?‘ Bush asked.

Bush suggested that could happen by listening to Americans who are ‘hurting and grieving.’

‘Those who set out to silence those voices do not understand the meaning of America – or how it becomes a better place,‘ he said.

Bush pointed to what he called the ‘heroes of America‘ – Frederick Douglass, Harriet Tubman, Abraham Lincoln, Martin Luther King Jr. – and noted that they are ‘heroes of unity.’

‘Their calling has never been for the fainthearted. They often revealed the nation’s disturbing bigotry and exploitation — stains on our character sometimes difficult for the American majority to examine,’ Bush said.

‘We can only see the reality of America’s need by seeing it through the eyes of the threatened, oppressed, and disenfranchised,’ the ex-president added.

And he suggested that’s what the country needed to do now.

‘Black people see the repeated violation of their rights without an urgent and adequate response from American institutions,’ he pointed out.