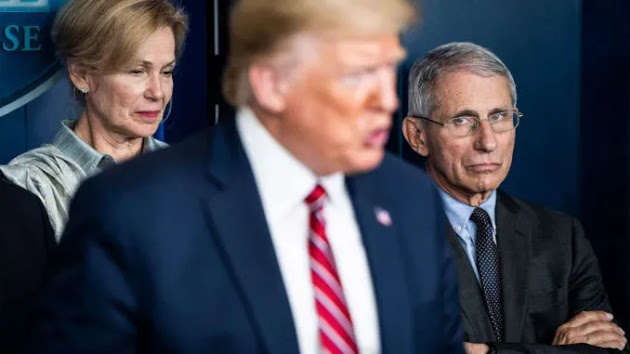 The White House has condemned the country’s leading infectious-disease expert Dr. Anthony Fauci for giving an interview in which he ‘appears to play politics’ over the coronavirus outbreak just days before the election.

Fauci praised Joe Biden’s and criticized President Trump’s covid repsonse three days before the presidential election. He also criticized Dr. Scott Atlas, who the President has relied on for advice on handling the coronavirus.

White House deputy press secretary Judd Deere. said: “It’s unacceptable and breaking with all norms for Dr. Fauci, a senior member of the President’s Coronavirus Task Force and someone who has praised President Trump’s actions throughout this pandemic, to choose three days before an election to play politics”.

Breitbart reports: Fauci spoke about the respective campaigns and their approaches in a paraphrased quote from the Washington Post:

Fauci said former vice president Joe Biden’s campaign “is taking it seriously from a public health perspective.” Trump, Fauci said, is “looking at it from a different perspective.” He said that perspective was “the economy and reopening the country.”

Deere criticized Fauci for publicly questioning the president in media interviews instead of pressing him privately to change his strategy.

“As a member of the Task Force, Dr. Fauci has a duty to express concerns or push for a change in strategy, but he’s not done that, instead choosing to criticize the President in the media and make his political leanings known by praising the President’s opponent — exactly what the American people have come to expect from The Swamp,” Deere concluded.

In the interview, Fauci warned the entire country was facing a resurgence of the coronavirus in the fall and winter months.

“We’re in for a whole lot of hurt. It’s not a good situation,” Fauci said. “All the stars are aligned in the wrong place as you go into the fall and winter season, with people congregating at home indoors. You could not possibly be positioned more poorly.”

Fauci complained the White House Coronavirus Task Force was a lessened influence in the White House, fearing that “right now, the public health aspect of the task force has diminished greatly.”

Fauci said he would continue doing more media interviews to “try to get the message out” but the Post wrote that Fauci indicated that he “needed to be careful with his words because he would be blocked from doing appearances in the future.”