Witch Bottles: How To Make An Ancient Magick Protection 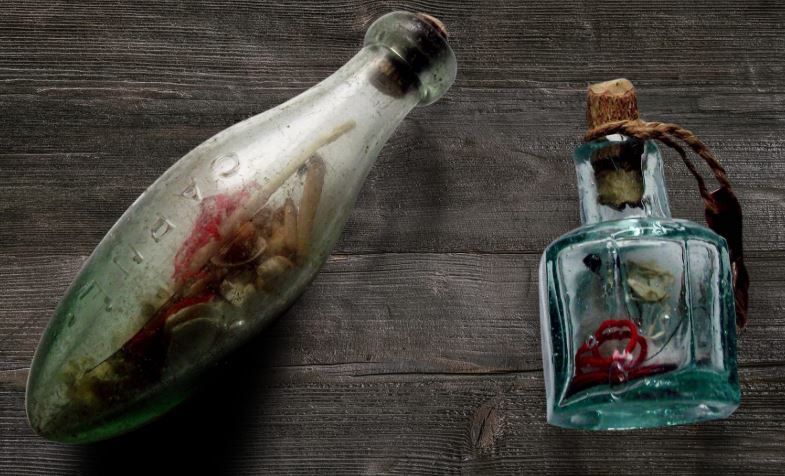 Anyone wishing to become a witch would be well advised, say the experts, to first lay in some protection against jealous rivals and ill-wishers in general. No matter how kind your own intentions, you are quite likely to attract the attention of other witches with fewer scruples.

Magic attracts some strange characters. Many are drawn to it for the worst possible reasons and might see you as trespassing on their territory. Other people are just hostile to any hint of magic and their plain ill-will can be as bad as a curse. So some kind of protection is advised. It will also protect from evil or demons and any negativity.

Luckily there is an ancient and well-tested method of deflecting all kinds of malice and bad will that a good witch can attract – the witch bottle! Witch bottles are strangely neglected these days but for hundreds of years they were very popular across rural Europe, particularly two or three centuries ago.

In England particularly, most country households had at least one buried somewhere and they still regularly turn up during the demolition or renovation of old buildings.

The most popular places to hide witch bottles used to be under the hearthstone or doorstep. Not only were these spots the least likely to be disturbed in a peasant cottage, but they were also the main openings by which a hostile spell might enter. Bottles were also often plastered into the walls, hidden in attics and buried in gardens or lonely places.

In the seventeenth and eighteenth centuries witch jars often had faces stamped in the glass or stoneware. In Germany and the Low Countries they were called Bellarmine jars after the unpopular 16th century Cardinal who first appeared on them in the Netherlands, but equivalents were made all over Europe.

The attraction of having a face on the bottle was that it would help trick a hostile spell or wish into thinking it has found its target and then getting trapped inside as in a rat-trap. These bottles were also popularly used for burying money, with spells cast on them to deflect treasure-hunters.

The idea of a witch bottle is that it will attract and trap hostile enchantments by tricking them into believing they have found their target i.e. you. The principle is almost the same as with voodoo dolls, but with the reverse intent. The bottle is meant to represent you so some of your personal fluids have to go into it.

Most commonly in the old days this was urine, with which the bottle is half filled. Next add some hair and maybe nail-clippings or even blood if you feel seriously threatened.

Blood is of course the most potent substance of all that you could use for this kind of magic (which is why vampires are so keen on it!) but, judging by the old witch bottles that have been chemically analyzed, our forbears do not seem to have considered it necessary.

However, if you happen to cut yourself while preparing your bottle, well, it would be silly not to take advantage of it for some added potency.

Between them, your ingredients will create a potent decoy or simulacrum of you on the magical plane. These days you are unlikely to find a jar with a face on it, but you could maybe draw a simple face on a piece of wood and add it to the mix.

Opinions are divided over whether you should include a photograph of yourself. Some say it adds strength to the spell, others that it makes no difference and a few warn that it is positively dangerous in case the bottle falls into the wrong hands. You’ll have to make up your own mind on this.

The next ingredients you need are some snares to trap the hostility being directed against you. These can be thorns, bent pins or nails, barbed wire, fishhooks, anything sharp and snagging in fact. Plus you can add a tangled ball of sewing thread, which is apparently very effective too.

This is all you need to make your self-protecting witch bottle. Some witches also add Deadly Nightshade and other potentially lethal herbs, and these are supposed to help if you know how to handle them safely, but are not essential.