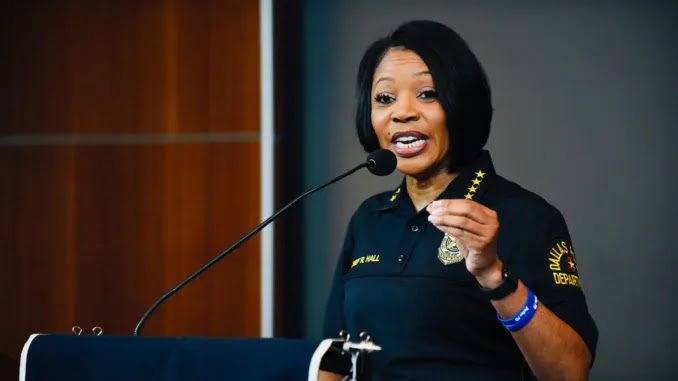 Dallas Police Chief Renee Hall warned protesters “If you break the law, we will arrest you” and unlike her peers in liberal cities, she remained true to her word when protests got out of hand in Dallas.

Hall had almost 700 individuals taken into custody at the same time and hit with at-large arrest charges after they refused to respect authority and blocked a major highway in the city.

After blocking the Margaret Hunt Hill Bridge, 647 protesters were put in zip-tie handcuffs and arrested.

A defiant Hall said in a subsequent press conference that she was the one who personally made the call to detain the individuals and stressed that she “warned” protesters not to break the law in Dallas or they would be arrested.

“We warned them,” she said, FOX 4 reported at the time. “If you break the law, we will arrest you.”

“There are many who question and are not happy with the decisions that I made on yesterday,” Hall said, as noted by CNS News. “Let me be clear, I am not here to make people happy. My job and our job in law enforcement is to keep this city safe. We have pledged that. We will do that. And that is our goal.”

“Although peaceful, the protesters broke the law,” the police chief continued. “On last night, they assembled and then they began to walk, and we supported that walk. When they began to enter the Margaret Hunt Hill Bridge they were given a warning because it is against the law.”

“The penal code 42.03, obstruction of a highway or passageway, says they are not allowed to walk in the middle of the roadway or freeway or overpass,” Hall explained.

The chief reiterated that protesters were warned, yet still blocked the highway. “They did not stop,” she said. “They decided to take a knee on the bridge and hold their hands up and say, ‘Don’t shoot!’”

“Again, no one should be surprised because my statement is, if you break the law, we will arrest you,” Hall stated.

DailyWire reports: On Sunday, protesters in Rochester, New York, blocked a major highway during an anti-police protest as officers surrounded them for protection.

None of the protesters were detained, arrested, or charged.

Protestors on the on ramp to 490 E at Plymouth. @nyspolice and @RochesterNYPD closed 490 to vehicular traffic. #Roc pic.twitter.com/2WzGF9zZgV

On the same day as the radical anti-police protest, two vehicles personally belonging to Monroe County Sheriff’s deputies were torched at their home.

The cause of the fire is being investigated as arson and the motive remains unclear.