A Creepy Haunted Doll That Aged, and One with Growing Hair 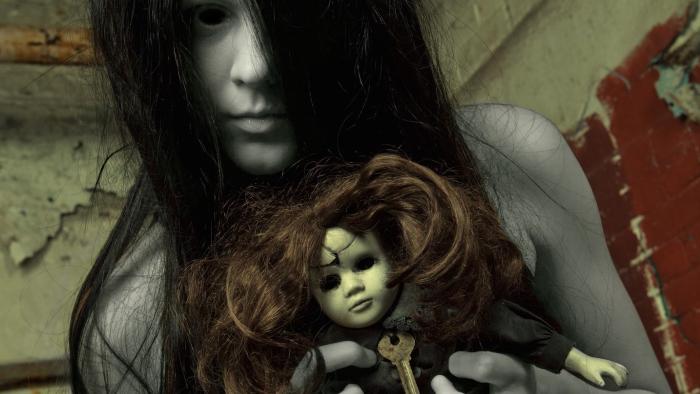 Dolls have been creeping people out since time unremembered. With their dead stares and soulless eyes they invite one looking upon them to feel a sense of unease and even dread. It is no wonder there have been myriad tales of supposedly haunted dolls, but some are even weirder than most. It would make sense that a piece of plastic might be haunted, but one would at least expect it to be static in form, unchanging, perpetually unhinged and strange. Yet there are some dolls that seem to change, to grow in a sense, and evolve in bizarre ways. Here we will look at a couple of purportedly haunted dolls that have managed to change and display strange qualities that make them stand out even among their disturbing brethren.

Our first tale here comes from the paranormal investigator Jim Eaton in his book, Ghosts Caught On Film 2. The report revolves around an unnamed family who one Christmas bought a doll for their young daughter to play with. The little girl loved it and played with it for years before doing what kids do and growing up. The doll was precious to the girl, so she didn’t want to throw it away, and her parents ended up just storing it with a bunch of other stuff up in the attic of their home. There was nothing particularly creepy or ominous about this doll at the time, and no reason to suspect there was anything off about it at all. That is, until they sort of rediscovered it 11 years later.

One day, the family was cleaning out the attic, getting rid of all of the cobwebs and old junk, when they came across the box that held what has used to be one of their now grown daughter’s most prized possessions. When they opened the box, they were shocked at what they saw. Although the doll had been in good condition when it was stored away, and placed in a sealed box, it had somehow aged, but not in the way an old toy would, but rather as a person might. The doll had once been designed to look like a baby, yet now it looked more like a wizened old man, covered in wrinkled flesh and with its tired, lifeless eyes surrounded by crow’s feet. The once supple arms and legs were now stiff and noncompliant, also sagging and wrinkled and old. How was it that this doll had managed to age like a human being, despite being nothing more than a collection of molded plastic? Eaton would say of it:

The family bought the doll in good condition. They decided to store it in the attic. When they stumbled on it 11 years later, they were shocked by how much it had aged – wrinkled like an old man.

The unsettled family decided to get rid of the thing, unable to explain what had happened to it and where it went after that seems to be a mystery. The story has made the rounds quite a lot on the Internet and generated a bit of speculation on what is going on here. Some doll collectors have suggested that this is simply the result of the materials used in the manufacture of the doll deteriorating and rotting with age, but this does not explain why it has such a wrinkled look, or why it should see such damage when carefully stored in a sealed box for only a bit over a decade. Dust and degradation are one thing, but this thing supposedly really looked like a little old man. There is also the idea that the doll was in fact haunted or cursed, or had picked up some spiritual energy from the girl through so many years of play that imbued it with this ability. Whatever the case may be, the creepy case of “The Doll That Aged” has become a rather famous example of a possibly haunted doll.

Perhaps just as strange, if not more so, is the tale of a doll that had hair that would not stop growing. The tale of the infamous doll, known as the Okiku doll, begins in Japan in 1918, when a boy purchased it while on a trip to the northern Japanese island of Hokkaido to give to his little sister, Okiku. The overjoyed little girl was smitten with the doll, and played with it every day, even going so far as to name it after herself, Okiku. The two were reportedly inseparable and went everywhere together until tragedy struck the following year and Okiku fell gravely ill. The girl soon died from complications of severe influenza and fever, and the mourning family placed her beloved doll in a family altar in memory of their daughter.

Not long after the heartbroken family placed the doll in the altar, they noticed something odd. The jet black hair of the doll, which had originally been cropped to about shoulder length and with neat ends in the traditional style, started getting longer day by day and the ends of the hair became random and haphazard in length in contrast to the straight cut it had had previously. Before long, the hair had grown all the way down to brush against the doll’s knees, which caused the rather alarmed family to conclude that Okiku’s spirit had somehow inhabited the doll. Even when the doll’s hair was trimmed, it soon grew back inexplicably and always stopped at around knee length.

In 1938, the Suzuki family moved to Sakhalin but was wary of taking the mysterious doll with them. Since they believed that their daughter’s spirit resided within the doll, they were unwilling to discard it and so they instead brought it to Mannenji temple, in the town of Iwamizawa, Hokkaido, Japan. The family explained the doll’s unusual qualities to the priest of the temple, yet he accepted it anyway and soon was able to see for himself that indeed the doll’s hair continued to grow. Trimming the hair became a regular chore at the temple, and soon pictures of the doll with hair of various lengths were adorning the shrine where it was kept. To this day, the doll remains at Mannenji temple, housed within a modest wooden box, and its hair purportedly continues to mysteriously grow no matter how often it is trimmed. The haunted Okiku doll has become rather famous throughout its native Japan, with its story being adapted into novels, films, and traditional Kabuki plays, which have mostly expanded and dramatized the story to include more ghostly, spooky elements such as the doll giggling, sobbing, wailing, or walking about, which were never actually reported by the family.

It is unclear what is going on with the eerie growing hair of the very creepy, pale-faced Okiku doll. No one has really been able to explain how it has kept growing continuously for the better part of a century. Is this a truly supernatural phenomenon or some sort of hoax? Samples of the Okiku’s doll have been taken and analyzed in the past and it was determined that the hair was indeed human, but this does not necessarily point to a supernatural origin. What is going on with this doll? Is this some sort of trick or are there paranormal forces we don’t understand compelling its hair to perpetually grow?

Are these just urban legends? Are they true examples of very unique haunted or cursed dolls? What can we say about these cases other than that they are eerily bizarre? They remain mysteries, and whether they are permeated by supernatural forces or not, these definitely rank among the creepiest dolls out there. If you come across one of these, fire works well, I hear. Try fire.