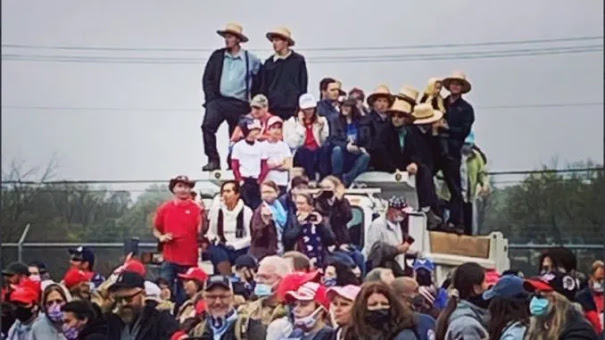 Amish voters came out in force to support President Trump at his rally in Lititz, Pennsylvania on Monday.

During his speech, Trump praised the Amish community for being “hard workers” and also made a dig at his opponent, “Sleepy” Joe Biden.

There were Amish attending the Lititz, Pennsylvania rally!

When you have off-the-grid Amish showing up for presidential rallies, you know that President Trump is unstoppable!#Trump2020LandslideVictory pic.twitter.com/f56Q9z15aH

He then added: “There’s a little relationship there. Hard workers, incredible craftsmen. You’ve done work for me over the years, I’ll tell ya. They can throw up a barn in about two days.”

Of course, liberal Twitter users soon attempted to claim the Amish standing behind Trump at the rally were “fake”.

One user claimed that one of the Amish men at the rally was “wearing earbuds and jacket with a zipper”, claiming that “the Amish shun both”.

Meanwhile, another desperate lib tweeted: “Hey people. Just an FYI – these are fake Amish. Real Amish do not allow themselves to be on film.” Some Amish do, some don’t.

Listen to this Trump riff on the Amish: "We have Pennsylvania Dutch…They're great people…Pennsylvania Dutch are voting en masse…Hard workers, incredible craftsmen. You've done work for me over the years, I'll tell ya. They can throw up a barn in about two days" #TrumpRally pic.twitter.com/LGEUeg14fh

While the Amish community does not usually vote in large numbers in elections, when they do vote they vote red, according to history expert Steven Nolt.

He explained to the Pittsburg Post-Gazette that their religion often precludes the Amish from getting involved with politics, but if they do decide to vote, their values mean they will not vote Democrat.

Nolt added: “They believe their primary calling is to live according to the principles in the Kingdom of God.”

Ninety percent of registered Amish voters are Republican, according to the York Daily Record.

The publication also reports just one percent are registered as Democrats, suggesting that this might be because of values rather than candidates.