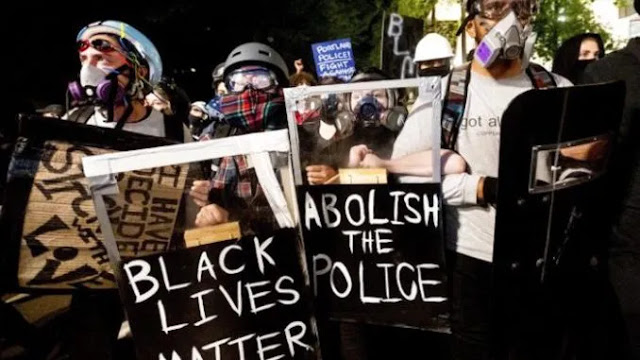 Antifa and Black Lives Matter protesters are begging people to stop sharing photos and videos of the violent protests and far-left criminality that has taken over the streets of major cities across America.

Far-left Antifa and Black Lives Matter protesters in Portland slaughtered an animal and set its head alight, as well as burning US flags and stacks of Bibles as violent riots in the city pass the two month mark.

#Antifa have started a fire on the front door of the Portland Police east precinct. They tore off the barricade and placed tinder around the fire. They’re trying to burn down the building. #PortlandRiots pic.twitter.com/2UN7o21dZy

Rioters were also trying to burn down a Portland police precinct before moving from the city center into a quiet residential neighborhood where they tried to blind a woman with lasers.

After #antifa were dispersed by police following the attack on the East Precinct, they tried to blind a woman at her home with lasers and attacked her.

Antifa have gone into residential parts of the city after moving on from attacking federal courthouse. pic.twitter.com/mKcrgHixmC

And like what #antifa have done w/every building they’ve attacked, they’re now tearing off the protective barrier to the east precinct to break inside. The crowd chants “didn’t see shit” to remind everyone to comply w/remaining silent. #PortlandRiots pic.twitter.com/tL8DlYcgfi

Will you listen to Antifa and stop sharing articles with videos and photos of far-left protesters engaged in criminal actions on American streets?

Or will you share these videos, pictures, and articles far and wide in the hope that every single one of the perpetrators is arrested and bought to justice for their crimes?