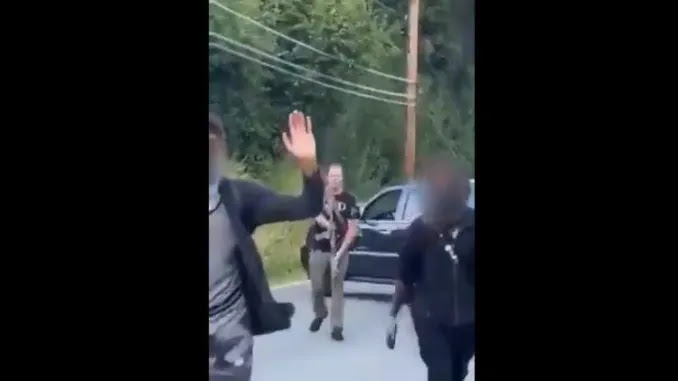 The patriotic citizens of Snohomish County put the liberal residents of Seattle to shame on Saturday, running Antifa and BLM rioters out of town as soon as they showed up in their suburb and threatened to cause a scene.

Far-left rioters have been destroying property and causing havoc in Seattle for more than two months now, but the out-of-town radicals were ejected from the Seattle suburb of Snohomish County by armed residents as soon as they arrived.

Residents in Snohomish County weren’t waiting for authorities to protect them. Video shows armed citizens standing guard over the entrance to their neighborhood.

“It was not peaceful. They were here to intimidate. Scare people. Scare children,” said resident Jamie Roulstone.

“There were children out there and they were asking them what schools they went to. They were yelling the most horrible things you’ve ever heard in your entire life.”

The rioting savages don’t like it when the tables are turned on them.

Many people on social media are deeply impressed with the actions of the Snohomish County residents, with some city-dwellers expressing the desire to live in a conservative, patriotic community that pulls together in times of need.

“This will become more common place and necessary as citizens band together to protect their lives and property from far-left subversive anarchists,” said Matthew Kolken.

According to the Snohomish County Sheriff’s Office, a group of about 200 protesters went to a quiet neighborhood that belonged to Seattle Police Chief Carmen Best this weekend.

Sheriff Adam Fortney was notified around 8:30 p.m. and by the time deputies arrived, the residents had already sent the out-of-towners packing, with most of the protesters dispersing or already gone.

“When the people showed up to my house, it certainly felt very personal about me,” said Chief Best who was not home at the time. “It really does seem like a mob mentality, and bullying, to intimidate a public official.”

Jamie and Whitney Roulstone live on the quiet street and said 30 to 40 vehicles were wrapped around the corner, according to Q13 Fox.

That’s when residents buckled down and used their own vehicles to block the protesters from moving further down the street where Chief Best’s home is located.