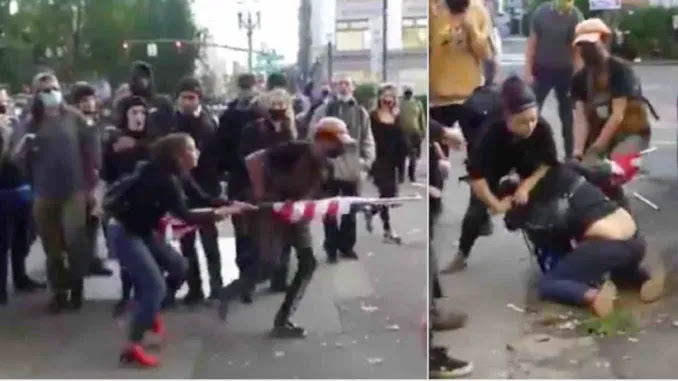 Antifa militants were caught on video Sunday ganging up on a patriotic black woman and dragging her to the ground by her hair because she was proudly holding an American flag.

But the violent far-left militants — despite outnumbering the patriots — were not able to take the flag off her.

According to journalist Andy Ngo, Antifa attacked conservative demonstrators — one of who was a woman proudly displaying a U.S. flag. When one of the militants grabbed her flag pole from behind and tried to take it from her, she refused to let go.

Another leftist jumped in — a female apparently — and grabbed the flag-holding patriot by her hair before dragging her down to the sidewalk.

And the patriot still wouldn’t let go of the flag.

There was a conservative protest today in downtown Portland. Antifa came to attack the attendees. As they were leaving, antifa tried to steal a woman’s US flag (she’s a person of color). She refused to let go & they pulled her to ground by her hair. She still didn’t let go. pic.twitter.com/AjM4pIPTGy

TheBlaze report: As a crowd gathered around the scrum, amazingly an Antifa female blocked and got in the face of a man holding a Thin Blue Line flag who towered over her by at least a foot. It appeared he was coming over to intervene.

But in the end, the attacked woman didn’t need any help. Just seconds later she emerged from the pile — still holding her American flag while Antifa was forced to settle for handfuls of air and yet another embarrassing failure.

After the victim walked away, a man from the pro-American group faced off and argued with an Antifa militant who hollered astoundingly that the fight was “woman on woman” as his voice repeatedly cracked.

The pro-American demonstrator who was arguing with the Peter Brady wannabe was wearing a “Justice for Jay” shirt. It’s a reference to Aaron “Jay” Danielson, a police and Patriot Prayer supporter who was fatally shot by an avowed Antifa militant after a rally backing President Donald Trump in late August.

According to KOIN-TV, supporters of Danielson gathered downtown Sunday at the spot where he was shot and killed, and “it appeared as if people with left-leaning and right-leaning ideologies got in some heated discussions in the streets. Some people reported being maced or hit with pepper spray.”

Sgt. Kevin Allen told the station that police were monitoring the event but no arrests were made. But the protests continued and at least six people were arrested in Portland Sunday evening.