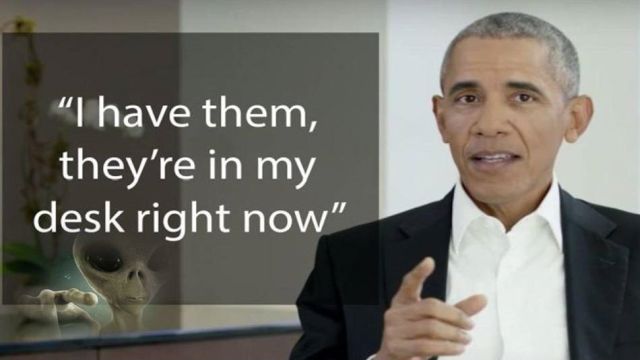 In the November 2017 Jimmy Kimmel show President Barack Obama talks about the fight against AIDS and the great progress that has been made towards getting rid of the disease once and for all.
During his speech he comes to the point that he is asking the people to join his fight against AIDS and says “If you do, I’ll share our files of Aliens.”

On which Jimmy Kimmel says “you can’t do that”

While in the 2015 Jimmy Kimmel show, President Barack Obama denies knowledge of Aliens now he suddenly states that he has secret classified UFO and Alien files right in his desk!

It is well known that White House officials and even US Presidents are kept in the Dark about any information on classified government programs involving UFOs and Aliens.

Nobody outside DoD, including the Secretary of State, is deemed to have a need to know about the country’s alleged secret UFO and alien database, including Area 51 in Nevada, so we may assume that even Obama, besides information on a "need to know basis", did not have access to any information on classified government programs involving UFOs and Aliens during his presidency.

So at least Obama’s statement is very unusual and we may wonder whether he really has such UFO and Alien files in his desk.

Besides, the fight against AIDS is reasonable even without the publication of the UFO and Alien files or it must be that he has a valid reason to connect classified UFO and Alien files with AIDS, from which it is said that it isn't caused by a virus at all, according to conspiracy theorists.