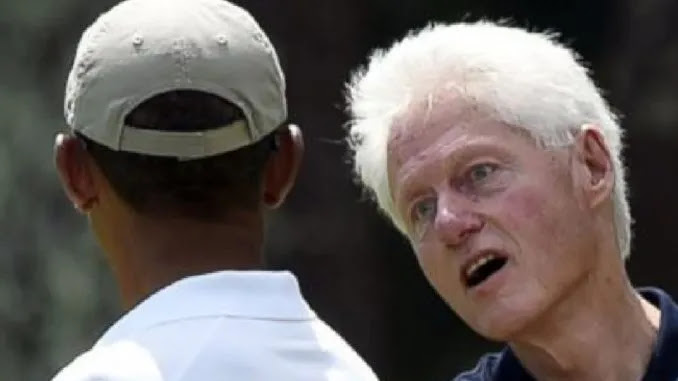 Former president Bill Clinton stayed in Jeffrey Epstein’s villa on the convicted pedophile’s private Little St. James Island because he owed him ‘a favor‘, according to unsealed testimony that was made public for the first time today.

Virginia Roberts told investigators in nine-year-old testimony that Clinton visited the island some time after his presidency ended along with her and two other ‘young girls‘ from New York.

When Roberts – who now lives in Australia and goes by the name Guiffre – asked Epstein what Bill Clinton was doing on the island, she says he laughed and said: ‘He owes me a favor.’

‘He never told me what favors they were. I never knew. I didn’t know if he was serious. It was just a joke,‘ she said.

DailyMail report: Roberts gave the testimony to lawyers in 2011, and was was included in a swathe of evidence complied by investigators in 2015, when she was suing Ghislaine Maxwell – Epstein’s alleged madam – for libel.

Maxwell, who gave hours of her own testimony to the investigation, eventually settled the case out of court and the documents were put under seal, meaning they could not be made public.

But that seal was partially lifted on Thursday following Maxwell’s arrest on sex crimes charges and perjury earlier this month.

‘Just about anybody would fly on his plane. There was never any set routine who would come and would go. It was an influx of people on Jeffrey’s airplane,’ she said.

‘There would be sexual conduct, there would be foreplay, there was a bed in there, so we could basically reenact exactly what was happening in the house,’ she said.

Maxwell is currently in a Brooklyn jail awaiting trial on sex trafficking charges as well as perjury, relating a deposition she gave under oath in the 2015 libel suit.

On Thursday, Maxwell filed an emergency motion with the federal appeals court in Manhattan to block the release of that deposition, along with one other document.

Lawyers for Maxwell said making her deposition public could make it ‘difficult if not impossible‘ to find an impartial jury for her criminal trial.

The two depositions, and materials that quote from or disclose information contained in them, were expected to remain sealed at least until Monday, depending on how the appeals court rules.

Materials covered by Preska’s July 23 order included flight logs from Epstein’s private jets; and police reports from Palm Beach, Florida, where Epstein had a home, among other documents.

Maxwell, 58, has pleaded not guilty to helping Epstein recruit and eventually abuse three girls from 1994 to 1997, and committing perjury by denying her involvement under oath.

She was arrested on July 2, and has been housed in a Brooklyn jail after a judge called her a flight risk. Maxwell’s trial is scheduled for next July.

Epstein was found hanged at age 66 last August in a Manhattan jail, while awaiting trial on sex trafficking charges for abusing women and girls in Manhattan and Florida from 2002 to 2005. He had also pleaded not guilty.