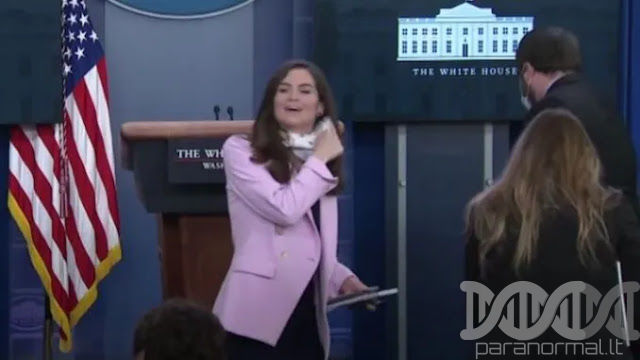 CNN White House Correspondent Kaitlan Collins has been slammed for being a hypocrite after she demanded to know why President Trump wasn’t wearing a mask during an event in the Rose Garden on Friday, then was caught removing her own mask as soon as the cameras stopped rolling following the media briefing.

During the event in the Rose Garden, President Trump and some other administration officials were not wearing masks while certain coronavirus task force members, like Dr. Anthony Fauci and Dr. Deborah Birx, were wearing them, Mediaite reported.

Trump replied, “We’ve all been tested and we’re quite a distance away and we’re outdoors, so I told them, I gave them the option, they could wear it or not.”

“So you can blame it on me, but I gave them the option. We could wear it or not,” he said.

Just seconds after the briefing ended, Collins was seen removing her mask, smiling, and walking close to other members of the mainstream media as they filed out of the room.

WesternJournal report: People on Twitter were quick to call the White House correspondent out for her behavior.

“When the press conference is over and the cameras are off you take your mask off because your agenda isn’t being shown for CNN. Right @kaitlancollins?” one user tweeted.

When the press conference is over and the cameras are off you take your mask off because your agenda isn’t being shown for CNN. Right @kaitlancollins ? pic.twitter.com/uayVJuRkHd

Another user said, “Arriving in a mask, and REMAINING in a mask are two different things… apparently. It’s almost as if YOU don’t think its necessary.”

Arriving in a mask, and REMAINING in a mask are two different things... apparently. It's almost as if YOU don't think its necessary. pic.twitter.com/BePwj7YIE6

Collins often reports on which members of the Trump administration and the coronavirus task force are wearing masks at different events.

In particular, Collins reported on Vice President Mike Pence choosing to wear a mask after he was criticized for not wearing one at the Mayo Clinic.

Collins is not the first reporter to be caught taking off her mask after an event.

Fake News keeps asking President Trump why he’s not wearing a mask, but NEVER asks Gov Cuomo. Media now wears their masks on camera, but they rip them off as soon as they’re off camera. 100’s of pictures of them doing that. #MaskGate #MAGA pic.twitter.com/tcjb8boFSm

Members of the media, as well as Chicago Mayor Lori Lightfoot, have all been caught unmasked either right before or right after media conferences. Source