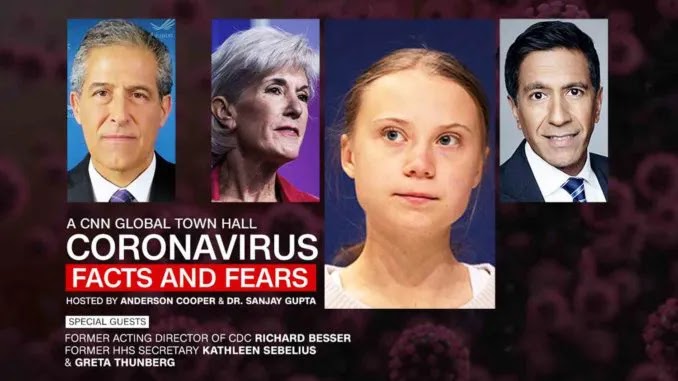 She said that she now thinks more people are beginning to realize the importance of listening to experts and the global science community.

The network came under fire after announcing that the Swedish teen would participate in the Covid-19 town-hall event hosted by Anderson Cooper and CNN Chief Medical Correspondent Dr Sanjay Gupta.

RT reports: Judging by Thunberg’s remarks during the discussion, it appears she at least partly agrees with her detractors.

“People are starting to realize that we are actually depending on science and that we need to listen to scientists and experts,” the 17-year-old said during the panel discussion.

"People are starting to realize that we are actually depending on science and that we need to listen to scientists and experts." -Teen activist Greta Thunberg on how people are reacting to science and what that means for the climate crisis. #CNNTownHall https://t.co/EvUEaN7gza pic.twitter.com/HLQb1AQ7ax

Conservative commentator Mark Dice jokingly suggested that CNN should interview a 12-year-old who has a lemonade stand about financial relief legislation.

Others chided CNN for becoming an “Onion-type” news organization by allowing Thunberg on the panel.

The Swede also used the occasion to underline how the pandemic was affecting children – claiming that Covid-19 has created a “children’s rights crisis” because the worldwide response has focused too heavily on safeguarding the elderly. In April, she donated a $100,000 prize she won to the United Nations Children’s Fund (UNICEF), arguing that children may ultimately suffer the most from the social and economic consequences of the pandemic.

Thunberg tweeted before the town hall that she has never claimed to be an expert, stating for the record that she is an “activist” and would use the panel to discuss her campaign supporting UNICEF.