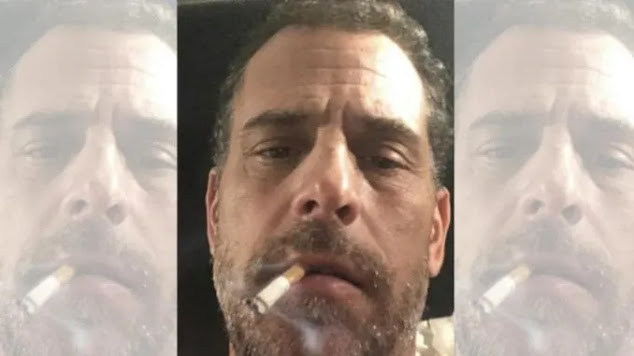 Patrick Ho was “suspected of acting as a covert agent of a foreign government.”

Newly uncovered documents show the warrant was filed against Ho in February 2018.

Ho was charged on Dec. 18, 2017 with conspiracy to violate the Foreign Corrupt Practices Act and money laundering related to CEFC China Energy contracts in Uganda and Chad.

Ho had been an executive at the multi-billion dollar Chinese energy company prior to his arrest. 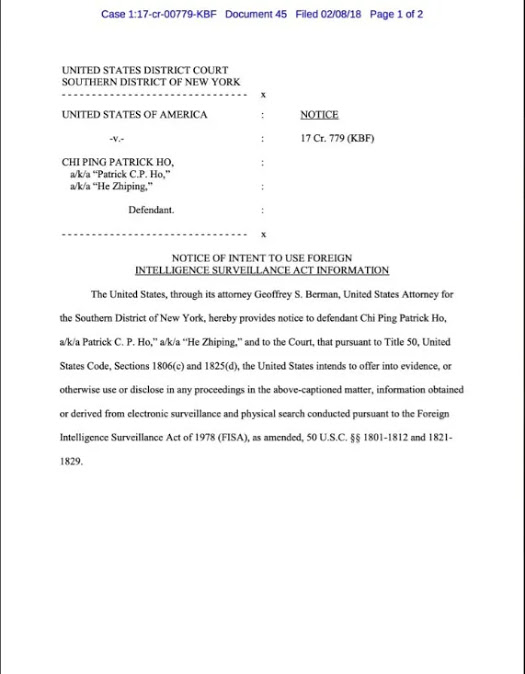 Dailycaller.com reports: Hunter Biden was part of a business consortium that sought a partnership with CEFC in May 2017. A Senate report released last month said that an affiliate of CEFC wired $5 million to Biden’s law firm from August 2017 through August 2018.

In addition to his partnership with CEFC, Hunter Biden also represented Ho during his legal battle.

According to a report from The New Yorker last year, CEFC’s chairman, Ye Jianming, raised concerns with Biden in summer 2017 about a possible investigation into Ho.

Biden agreed to represent Ho and to find out the extent of the investigation, according to The New Yorker report.

The New York Times reported in December 2018 that Ho’s first call following his arrest the year before was to James Biden, the brother of the former vice president.

The Republican senators who released the report asserted that Biden’s relationship with CEFC posed counterintelligence concerns, in part due to Ye’s links to the People’s Liberation Army and the Chinese Communist Party.

The court filings in Ho’s case suggest that federal investigators had counterintelligence concerns about Ho.

“The United States intends to offer into evidence, or otherwise use or disclose in any proceedings in the above-captioned matter, information obtained or derived from electronic surveillance and physical search conducted pursuant to the Foreign Intelligence Surveillance Act,” prosecutors said in the Feb. 8, 2018 court filing.

Ho’s lawyers tried to block evidence obtained through the FISA process from being used at Ho’s trial, according to one filing submitted in his case.

Prosecutors in the Southern District of New York, where the case was tried, responded in a court filing of their own defending the use of evidence from the FISA in Ho’s case. They did not disclose the basis for obtaining the FISA warrant or say when it was granted.

The court filing also says that the evidence derived from the FISAs was classified.

Ho was convicted in March 2019 and sentenced to three years in prison.

On Tuesday, the National Pulse website published an audio recording purportedly from Hunter Biden’s laptop in which he referred to Ho as a “spy chief.”

“I have another New York Times reporter calling about my representation of Patrick Ho – the fucking spy chief of China who started the company that my partner, who is worth $323 billion, founded and is now missing,” Biden is heard saying on the audio recording, according to The National Pulse.

Hunter Biden indicated in text messages early on in his dealings with CEFC that he suspected his work with the firm might require him to register with the Justice Department under the Foreign Agents Registration Act (FARA).

He wrote to a business associate on May 1, 2017 that they should form a U.S.-based partnership in order to avoid scrutiny under FARA or the Foreign Corrupt Practices Act (FCPA), the law that Ho was eventually charged under.

“We don’t want to have to register as foreign agents under the FCPA which is much more expansive than people who should know choose not to know,” Hunter Biden wrote to his then-business partner Tony Bobulinski on May 1, 2017, according to a message obtained by the DCNF.

The FISA process came under intense scrutiny during the investigation of the Trump campaign’s ties to Russia because the FBI was found to have misled the FISC regarding evidence against Carter Page.

The Justice Department invalidated two of the four FISA warrants granted against Page because the FBI submitted false information to the FISC.

Unlike Ho, Page was never accused of criminal wrongdoing. One piece of evidence that the FBI withheld from the FISC was that Page had a previous relationship with the CIA.

The Foreign Intelligence Surveillance Court grants surveillance authorization to the FBI and Justice Department in cases in which there is probable cause to suspect the subject of the warrant is working covertly for a foreign government.