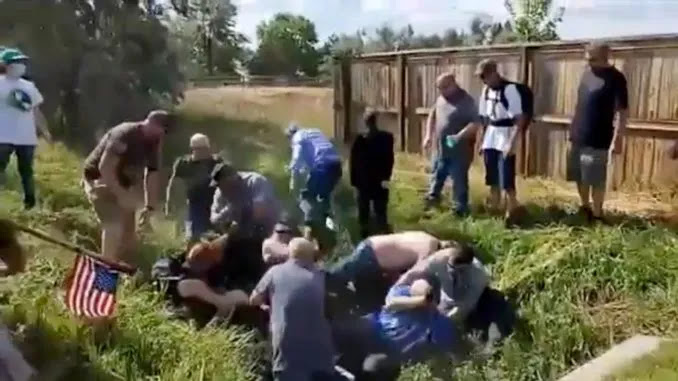 While Antifa continue to wage a campaign of terror in major American cities, destroying property and night after night, the residents of a Fort Collins suburb in Colorado dealt with the far-left anarchists as soon as they showed their face in their neighborhood and threatened to cause a scene.

As tensions mounted between Antifa and local residents, a brawl erupted between the two groups, with footage shared on social media clearly showing the Fort Collins residents coming out on top.

NationalFile report: Antifa protesters were marched out of the Fort Collins neighborhood by counter-protesters waving “Trump 2020” and “Back The Blue” flags. A child’s birthday party was reported hosted nearby, prompting residents and counter-protesters to take action.

The radical left-wing anarchist group was marshaled out of town as locals heckled and jeered, telling the “f***ing communist scum” not to show their faces in the neighborhood again.

Antifa protesters had then allegedly assaulted a man in a wheelchair before they were dogpiled by patriotic counter-protesters. As the brawl simmered down, police were immediately at the scene to help separate the two groups.

The man recording the clip through a bullhorn told the Antifa protesters “you guys came to the wrong the city, boys and girls,” as they were beaten.

“Everybody keep your hands off your weapons,” one attendee shouted. “Keep punching each other in the face, just don’t shoot anybody.”

Police reportedly made three arrests with one citing following the disturbances in the Colorado city.