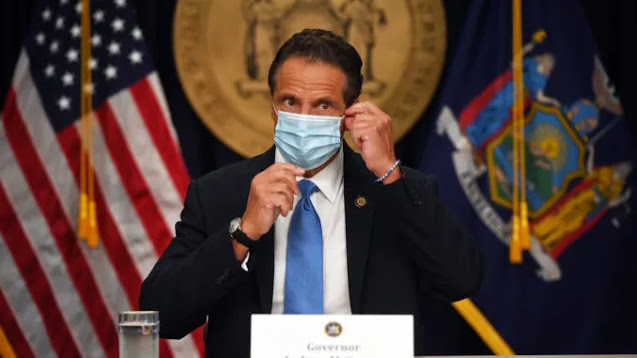 Governor Andrew Cuomo has warned that parts of New York City are heading toward even tighter coronavirus restrictions, including the most restrictive ‘red zone’ which would prohibit all ‘non essential’ gatherings.

Cuomo stated that some areas, namely Staten Island, Long Island, and parts of Manhattan, were “in the warning track” and could soon face additional restrictions due to concerns over rising infection rates

He said: “The rate goes up; there are more restrictions to slow the economy, that’s bad for business. Rates go up, you overburden the hospital system, you overburden doctors, nurses, you can have possible equipment supplies Numbers go up and people die. People die. Period”

Brietbart reports: The governor said such areas “will go into those zones” unless the existing trajectory “dramatically” changes.

Cuomo has come under intense scrutiny in recent weeks after placing a ten-person cap on gatherings at private residences and pleading with local governments to enforce his mandate.

“The rules are only as good as the enforcement. Local governments are in charge of enforcement. There are only two fundamental truths in this situation: it’s individual discipline and it’s government enforcement. Period. End of sentence,” he said. He has since lashed out at law enforcement officers who have vowed not to enforce his edict.

“I don’t believe that person is a law enforcement officer,” Cuomo said at a Wednesday press conference.

“I don’t want a law enforcement officer who says, ‘I’m only enforcing the law that I like or think should be enforced,’” the Democrat governor added.

Last week, Cuomo explicitly urged people to stay away from their loved ones.

“Your safe zone is dangerous this year. Please. Love is sometimes doing what’s hard. This year, if you love someone, it is smarter and better to stay away,” he said:

The safest way to celebrate Thanksgiving this year is with your immediate household only. pic.twitter.com/nBEviXnZ8P