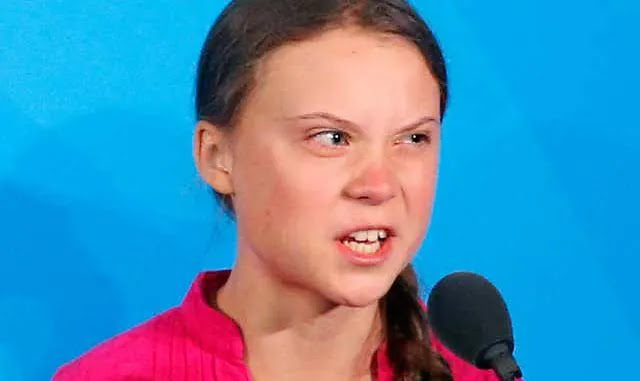 Teen activist Greta Thunberg has mocked the US Supreme Court nominee Amy Coney Barrett for declining to give her opinions about climate change during her confirmation hearings on Capitol Hill this week.

The Swedish activist likened the judge’s refusal to say that climate change is real to lacking a view on gravity and even compared her to flat earthers.

RT reports: The Swedish teenager’s snarky attack came after Barrett dodged questions from Democrats this week regarding her views on climate change. For instance, Barrett told Senator Richard Blumenthal (D-Conn.) that she didn’t think her views on climate would be “relevant to the job I would do as a judge,” and that she hadn’t studied scientific data enough to offer an “informed opinion.”

She's back at it again: "I don't think that my views on global warming or climate change are relevant to the job I will do as a judge…I'm not really in a position to offer any informed opinion on what I think causes global warming" pic.twitter.com/0gAsk5XCcg

And when Senator Kamala Harris (D-Calif.) asked Barrett whether she agreed with a series of obvious facts to set up a falsely analogous question on climate change, the judge said, “I will not express a view on a matter of public policy, especially one that is politically controversial, because that’s inconsistent with the judicial role, as I have explained.”

Amy Coney Barrett:
-Coronavirus being infectious is an "obvious fact"
-"Yes, every package of cigarettes warns that smoking causes cancer"
-Climate change is a "contentious matter of public debate" pic.twitter.com/smHr21lRDZ

First, she said that she has “no firm views” on the established scientific consensus that climate change is, in fact, real. pic.twitter.com/pabinEaTBm

Left-wing media outlets, such as Mother Jones, the Daily Beast and Salon chimed in with articles suggesting that Barrett is a “climate denier,” and Gizmodo said her “soft climate denial should be wildly disqualifying.” Climate writer Eric Holthaus said, “Quite simply, if you’re neutral on climate change, you’re complicit in the collapse of the planetary ecosystem upon which the survival of every living thing depends.” He called Barrett “scary” and suggested that she “isn’t qualified to evaluate factual evidence.”

But Holthaus stumbled over the issue that might have made Barrett’s responses so alarming to him: neutrality. Twitter users pointed out that Thunberg and other activists seem to be missing the point that high court judges evaluate cases on how they stack up against constitutional law, not their own views.

“Dear Greta,” one commenter wrote, “attending school might help understanding the role of a judge in society and the rule of law.” Another tweeted, “As a Supreme Court judge, the role will not be to offer an opinion on scientific issues. It will be to decide if matters coming before her are constitutional.”

Thunberg has been remarkably political in the past week for someone who said she never engages in “party politics.” On October 10, she called for people to “get organized and get everyone to vote (Joe) Biden” in the November 3 US presidential election. Democrats in Congress declined to call for an investigation of foreign election meddling by the Swedish citizen.