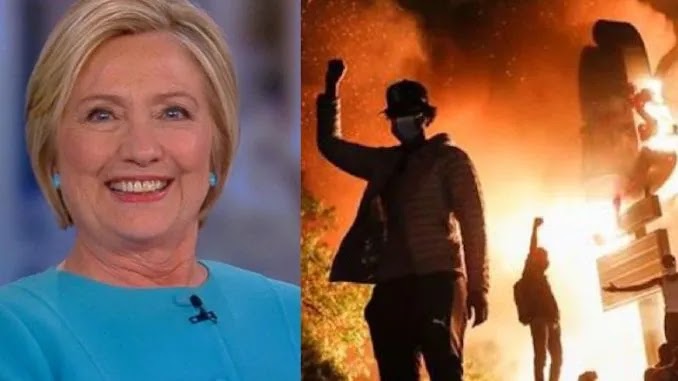 “Black lives matter” is a “theological statement” according to Hillary Clinton, who says the Christian Church in America needs to “take a hard look at itself” and join what she describes as the BLM “moral awakening.”

Hillary also slammed Christianity for being guilty of becoming “so judgmental, so alienating” that it’s driving away young people who think “well, I don’t need that.”

The twice failed presidential candidate made the comments while interviewing social justice advocate and Pastor William J. Barber II of Greenleaf Christian Church in Goldsboro, North Carolina, last week on her “You and Me Both with Hillary Clinton” podcast.

According to Clinton, the majority of Christians vote conservative because the Republican Party is making a “very deliberate, concerted effort” to own Christianity in the US — and not because the Democrat Party has completely abandoned any pretense of upholding Christian values.

“When you think about the very deliberate, concerted effort by one political party to basically try to own Christianity and it overlooks the role of the African-American church, it overlooks, as you say, a lot of theology, a lot of history. It also overlooks this moment in time. Black Lives Matter I view as very profoundly as a theological statement,” she said.

When Clinton asked Barber if he thought America was “finally going to have the moral reckoning that has been distorted and perverted and postponed for so long,” Barber pointed out that while America had the theology of “slaveholder religion” there was also the “religion of the abolitionist” that countered that historically with diverse people coming together to fight racism.

The ongoing protests about racial inequality and injustice, Barber argued, are the “birth pains” of what he sees is a third reconstruction.

“We’ve had two reconstructions, one between 1868 and 1896. And then we had the second reconstruction, 1954 to 1968. And I think America needs a third reconstruction. I think this is the birth pains of it,” Barber said.

“I think this moment can be a moment where we come to terms not just with systemic racism as it affects black people, but systemic racism in all of its manifestations against brown people, against First Nations people, but also systemic poverty and ecological devastation and the war, economy and the false moral narrative of religious nationalism.

“This is a moment, if we don’t miss the moment, if we match our policy decisions to the mourning we see in the street, and if we don’t treat this as a spectacle event, rather than recognizing this is a call for reconstruction, this is a moment that we can fundamentally shift, but it’s going require a lot of shift. It’s going to require politicians to shift. It’s going to require people that may run for office to be moderate, to recognize we’re not in a moderate moment, we’re in a reconstruction moment. We’re in an FDR moment. We are not in normal times. And God help us if we blow this moment. That’s the way I feel about it.“

Clinton then questioned Barber on how the Church should respond to the moment in 2020 particularly since so many people are leaving the Church.

Barber, who recently released a new book, We Are Called to Be a Movement, suggested that churches need to promote faith that is “transformative.”

“Young people are very open to faith that is about transformation, about love, about justice, about equality, about the essence, the essence of what it means to be people of faith. And I think we have to be engaged. There’s no way in the days in which we live, the church can stay quarantined inside of the four walls of a building because that’s never what it was intended to do,” he said.