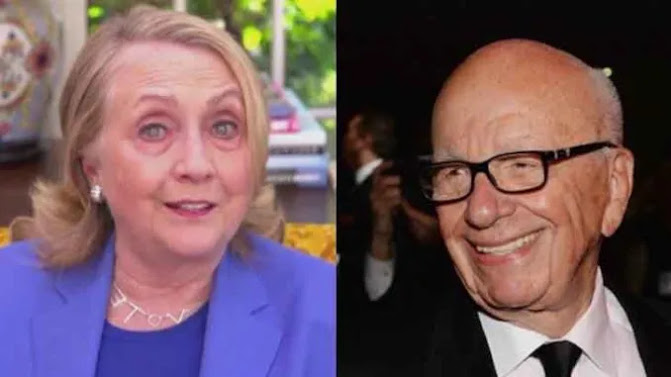 The entire Murdoch family, including 89-year-old mogul Rupert Murdoch, secretly backed and ‘loved’ the Clinton Foundation and Hillary Clinton before and during Donald Trump’s presidency.

Federal elections records show that Murdoch has donated to far-left Democratic politicians including Chuck Schumer, Anthony Weiner, John Kerry and Hillary Clinton, for whom he hosted a fundraiser in 2006, shortly before her first failed presidential campaign.

But it gets worse.

FAIR, a liberal media group, even bragged about how much Fox News was donating to Hillary Clinton during her 2016 campaign against Trump. FAIR wrote:

“All of the broadcast giants are on board. Clinton is the largest individual recipient of campaign donations from Comcast (NBC News, MSNBC), Time Warner (CNN), News Corp (Fox News), CBS Television and Walt Disney (ABC News).”

Frontpagemag.com reports: No longer viewed as a stalwart of conservative causes, the Murdochs, including Fox News, have been moving to the left for years coinciding with the Democratic Party’s cementing itself as the party of the global elite.

Worrisome to conservatives should be New York Times columnist Maureen Dowd’s assertion that after Rupert Murdoch passes, his son James, a strong liberal who has opposed Trump, will join with his left-leaning two sisters in controlling the family’s vast media empire, including Fox.

James and his wife Kathryn, considered a liberal power couple, are multi-million-dollar donors to Democratic candidates and causes. In this election cycle, alone, they wrote a check for $1 million to try to help Chuck Schumer and the Democrats win the Senate.

At long last, longtime Fox viewers are finally grasping the magnitude of the organization’s ideological shift, at the behest of President Trump’s awareness campaign.

However, in actuality, this shift has been taking place for years.

Glenn Beck, a mainstream and popular conservative commentator tossed from Fox’s evening line-up, said he was prohibited from criticizing George Soros on his show.

His claim was perhaps demonstrated as true this past September, when Fox News hosts cut off former Speaker Newt Gingrich, after he started discussing Soros funded initiatives.

The transcript of that exchange was eerie and further portrays Fox News’ true political allegiances:

“I’m not sure we need to bring George Soros into this,” said co-host Melissa Francis.

“I was going to say you get the last word, Speaker,” Fox host Harris Faulkner said.

“He paid for it. I mean, why can’t we discuss the fact that millions of dollars…” Gingrich said before co-host Marie Harf responded.

“No, he didn’t. I agree with Melissa. George Soros doesn’t need to be a part of this conversation,” Harf said.

“OK. So, it’s verboten [to talk about Soros],” Gingrich replied.

The inclusion of this transcript herein is not an attempt to peddle an erroneous Soros conspiracy theory. Rather, it is merely meant to illuminate that Fox News may be prohibiting criticism of one the most prolific radical left-wing donors in this country’s history. Why? Perhaps because they are sympathetic to the liberal causes he so intensely supports.

Soros, apparently, is not the only topic of discussion barred from Fox’s airwaves. Long-time Fox contributor Dick Morris stated that “Fox always tried to tell [him] never to criticize China when you’re on our air. [He couldn’t] believe the censorship that goes on [there].”

President Trump, never one shy to criticize news outlets, has made his determination about Fox News’ credibility.

Shortly, after the election, he tweeted:

.@FoxNews daytime ratings have completely collapsed. Weekend daytime even WORSE. Very sad to watch this happen, but they forgot what made them successful, what got them there. They forgot the Golden Goose. The biggest difference between the 2016 Election, and 2020, was @FoxNews!

Prior to election night, Mishkin had “been skeptical of Mr. Trump’s chances on social media and in occasional Fox appearances.”

Mishkin is a lifelong Democrat, who voted for Hillary Clinton in 2016, and built his career working exclusively for liberal politicians.

The unsurprising result of Fox’s decision to have Mishkin calling the shots was seen on election night, when Fox News viewers were outraged to see the network refuse to call Florida for Trump, a state he won handily, while they were the first to call Arizona — a much tighter affair — for Biden.

For years, anchors like Neil Cavuto and Andrew Napolitano have derided and repeatedly criticized President Trump’s (often mainstream conservative) policies and proposals. Indeed, the Chris Wallace’s 2020 smug presidential debate moderation was one of the most bewildering and decried moments leading up to election day.

As ratings amongst its viewers continue to evaporate, it is obvious these blips are the result of a larger ideological shift within the Fox News Organization.

Today, instead, President Trump himself is encouraging his followers to tune in to Newsmax TV and OANN.

Fox News’ long-held monopoly over GOP politics has been fraught with risk and posed great danger to conservatives. For too long, viewers have been fed a false bill of goods.

Just ask Donald Trump about it.