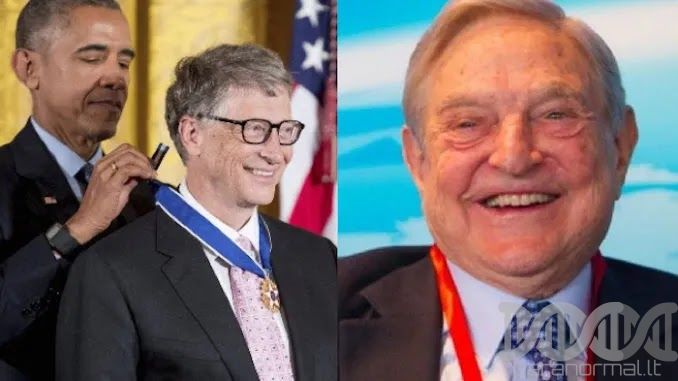 The celebrity campaign #PasstheMic is enlisting A-list Hollywood stars to hand over their social media accounts to experts such as Dr. Anthony Fauci to promote a “global response” to the Chinese coronavirus pandemic.

But who is really behind this propaganda campaign?

The list of donors and officials behind the #PasstheMic campaign includes a long list of far-left globalists such as US frontman Bono, George Soros, and Bill Gates. The person at the head of the organization is Gayle Smith, a former special assistant to Barack Obama.

Breitbart.com reports: The guest line-up features another physician who has publicly denounced President Donald Trump’s immigration policies and handling of the coronavirus crisis, while praising the World Health Organization, which downplayed the gravity of the outbreak in its early weeks.

In a video interview with Julia Roberts on Thursday, Dr. Fauci urged people to pay more attention to how the coronavirus is impacting poorer countries. “We have, really, a moral responsibility for people throughout the world,” he said.

Fauci also warned Americans not to re-open the economy too quickly. “Now is not the time to tempt fate and pull back completely,” he said. “There is a golden mean there.”

Day 1 #PassTheMic - Dr Fauci, Director @NIAIDNews, tells Julia Roberts about the responsibility we ALL have for people throughout the world in the global fight against #COVID19. Demand Action now #PassTheMic #ONEWorld https://t.co/16AqIHFYIp pic.twitter.com/aHQwQEs0aS

ONE Campaign was co-founded by Bono as an advocacy group to combat poverty and illness, especially in Africa. The group is closely aligned with the Bill and Melinda Gates Foundation, which has donated millions of dollars and holds a seat on its board of directors.

The Gates Foundation  — the wealthiest philanthropic group in the world — has come under fire for the way its leaders have slammed President Donald Trump while praising China. Bill Gates recently praised China’s handling of the outbreak, saying that “China did a lot of things right at the beginning.” His remarks were promoted  on social media by Chinese state media.

Meanwhile, his wife, Melinda Gates, recently gave President Trump a “D-“ for his response to the outbreak, saying that “we need leadership.”
The Gates Foundation is also a major donor to the World Health Organization, the embattled United Nations agency whose botched handling of the Wuhan virus and close ties to China’s Communist regime have prompted President Trump to suspend funding.

ONE Campaign also receives money from the Open Society Policy Center, the Soros lobbying group that opposes the Trump agenda and  promotes open borders and other left-wing political issues.

Gayle Smith, who currently serves as president and CEO of ONE Campaign, previously worked as a special assistant to President Obama, who later appointed her to head USAID.

Smith has publicly criticized President Trump’s decision to suspend funding to the WHO. “A cut in funding would mean a reduction in funding possibly for the fight against polio where we’re near successful,” Smith said in an interview with CBS’ Face the Nation.

“He doesn’t represent what America stands for!” she tweeted this week.

While all these leaders were pledging, showing solidarity and investing in what matters-health, one leader was busy taking hydroxychloroquine & drafting a letter to permanently stop funding from WHO. He doesn’t represent what America stands for! We miss integrity & authenticity. https://t.co/0PRTVGTGvT

Bridges, Not #Walls gets you the Nobel Peace Prize @realDonaldTrump . May be you can learn a thing or two from @AbiyAhmedAli @PMEthiopia @BarackObama. No to war! No to xenophobia, racism and sexism! All world leaders should heed this example. @IlhanMN @AOC @DrSenait @Malala https://t.co/M9hQBt83gx

Other celebrities who are set to participate in #PasstheMic include Penelope Cruz, Shailene Woodley, and David Oyelowo.