WATCH: Pastor Whose Church was Shut Down, Owns 20 Cops for Not Social Distancing 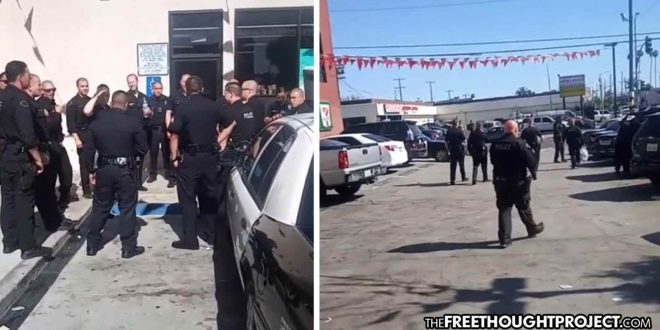 Los Angeles, CA — As videos continue to surface of cops breaking social distancing guidelines to enforce social distancing guidelines, many Americans who have had their livelihoods turned into ashes, are beginning to see that the government’s reaction to COVID-19 seems to be more about control than safety. A pastor in Los Angeles, who reportedly had his church shut down because of these arbitrarily enforced dictates, seemingly had enough and took to exposing it this month.

In a video taken earlier this month, the unidentified pastor noticed a large gathering of cops outside of a 7-11 on a Tuesday morning and decided to expose their hypocrisy. The interaction was nothing short of epic.

“Please notice how many police officers you see gathered together over here. Now, let’s see if they are socially distancing or if they are wearing masks,” the pastor says as he rounded the corner of a shopping center to find 20 cops all violating the social distancing laws that they have been arresting people over.

The pastor then begins counting the cops and notes that there are 20 of them standing very close together — an act that could warrant riot police if they were regular citizens.

“Notice that none of them are wearing masks and they are standing very close together,” he says. “But you shut down my church, saying it was ten or more.”

Having been “caught” breaking the very dictates they are tasked with enforcing, the cops begin to scatter like insects after the pastor exposes them. The pastor then attempts to hold the officers accountable by getting all of their names as they try to walk away.

Take notice, that in the video, not one, but two of the officers are even parked in handicapped parking spots. This is the typical mindset of many police officers who advocate the “do as I say, not as I do” way of policing. Though it is shameful, it happens on a regular basis.

“Number one, they will shoot a black man or an Hispanic, or a poor white man in a heartbeat over here,” the pastor says.

As the video ends, this pastor says what we here at TFTP have been advocating for nearly a decade, “It’s time for the police to be policed.”

As you watch the video above, try to empathize with the folks who may not be taking the social distancing orders seriously. It is quite hard to follow orders when the ones giving them to you aren’t willing to do so themselves.

“Six feet! Six feet!” a person is heard yelling when the cops exited the vehicle.

All of the sudden, as the male officer rounded the front of his cruiser, a young man runs up with a water gun and starts spraying. He was clearly not afraid of how the officer would react and seemed to be doing it as a joke.

The first person spraying would then set off a chain reaction of other people joining in and spraying the officers. Eventually, they were hit with so much water that they had to retreat.

As the two officers got in their vehicle, a torrent of water was unleashed on their cruiser with one person throwing a water gun as the pair drove off. Source