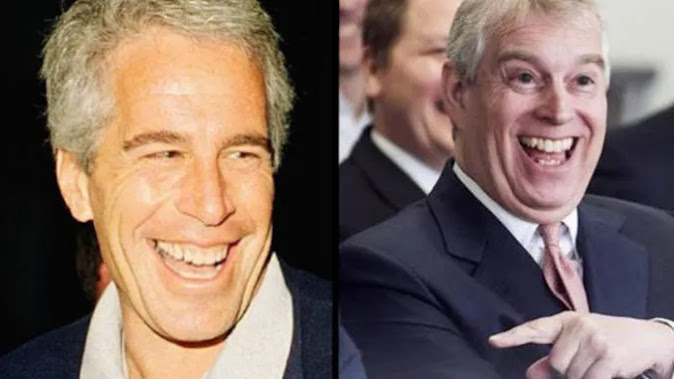 Prince Andrew “watched and laughed” while a little girl was forced to strip by pedophile billionaire Jeffrey Epstein, according to new allegations.

The teenage victim claims that the Duke of York was visibly excited as she was forced to take off her clothes and be photographed topless during a visit to Epstein’s notorious ‘pedophile island.’

Epstein’s sex trafficking victim, Virginia Roberts, now Virginia Giuffre, claimed that she and several other Russian girls were told to pose in “sexual positions” while Prince Andrew sat watching in 2002.

The disturbing claims are made in a new book by investigative journalist Barry Levine called The Spider.

As expected, the bombshell allegations have been denied as “unsubstantiated and lurid” by a source close to The Duke.

Dailymail.co.uk reports: Ms Giuffre told how the disgraced financier Epstein had allegedly watched the girls topless and asked: “‘Why don’t you girls start kissing and have some fun?”‘, as ‘Jeffrey and the prince were just sitting back laughing’, The Sun reports.

The book also features claims from Ms Giuffre, then a teen, that she was made to perform oral sex on Prince Andrew in front of a six-foot ‘lesbian’ oil painting of herself – with Epstein’s ‘madam’ Ghislaine Maxwell watching.

Ms Giuffre, who says she was trafficked by pedophile financier Epstein, alleges the duke had sex with her on three separate occasions, including when she was 17, still a minor under US law.

Andrew has categorically denied he has had any form of sexual contact or relationship with Ms Giuffre.

The duke’s friend, British socialite Ghislaine Maxwell, is awaiting trial in the US after being charged with procuring teenage girls for Epstein to abuse.

She denies the charges.

In The Spider Ms Giuffre also claims that Prince Andrew grinned like ‘a kid going to Disney World’ before the sexual encounter with her in New York in front of the lesbian painting, which allegedly took place a year before the photoshoot.

After being sat on to Andrew’s knee along with Johanna Sjoberg, another Epstein accuser who worked as Maxwell’s assistant, Ms Giuffre had a ‘sexual encounter’ with Prince Andrew in Epstein’s massage room, performing oral sex on the royal, the book claims.

The book reads: ‘This time their sexual encounter took place in Epstein’s massage room and in the presence of Ghislaine Maxwell.’

Prince Andrew has continually denied any wrongdoing or sexual contact with Ms Giuffre.

The Spider: Inside the Criminal Web of Jeffrey Epstein and Ghislaine Maxwell by Barry Levine is published by Penguin Random House USA.