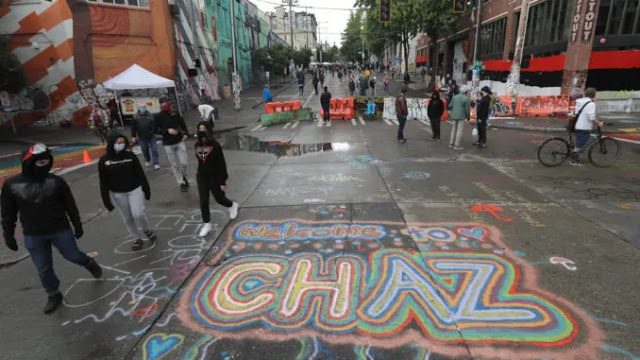 Police in Seattle have started to clear out CHAZ the “autonomous zone” created by Black Lives Matter protesters.

Protesters who refused to vacate the area have been arrested, the police said.

Seattle’s mayor recently announced that authorities would take back control of occupied streets known as the Capitol Hill Autonomous Zone, or “Chaz” or “CHOP” following violence and shootings at the site.

Live feed shows the remaining protesters trying to hold their ground near the East Precinct, which was abandoned by police last month.

At the time of writing at least ten arrests had been made.

RT reports: Officers can be heard advising demonstrators to leave the barricaded encampment around the Capitol Hill neighborhood, known as CHAZ and CHOP, or face detention.

This is no joke. pic.twitter.com/nTGint5UUY

Mayor Jenny Durkan had earlier issued a public safety emergency order to vacate the area. Police Chief Carmen Best said in a statement that her officers were moving in after “weeks of violence” in and around the protest zone.

Since its formation on June 8, the camp saw four shootings that resulted in multiple injuries and two deaths.

“The CHOP has become lawless and brutal. Four shootings – two fatal – robberies, assaults, violence and countless property crimes have occurred in this several block area,” Best wrote. She stressed that her department would work with demonstrators to “build trust” and “begin meaningful dialogue about reenvisioning public safety in our community.”