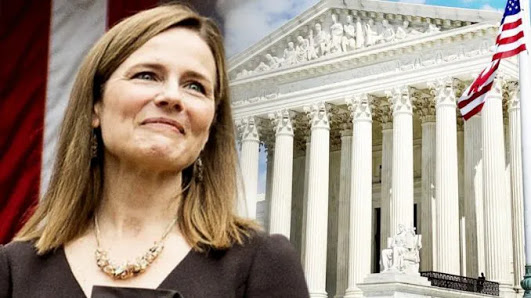 The Senate voted to confirm Judge Amy Coney Barrett to the Supreme Court on Monday night.

This makes her the third justice to join the nation’s highest court under President Trump. Barrett fills the seat vacated by the death of Ruth Bader Ginsburg.

RT reports: Barrett was confirmed on Monday evening in a vote that was largely expected, with no Democrats in favor and most Republicans in favor, enough to clear the Senate in which President Donald Trump’s party enjoys a slight majority.

The final vote was 52 in favor to 48 opposed, with only Susan Collins (R-Maine) joining the Democrats to vote “no.”

Her swearing-in ceremony was already scheduled for later in the evening at the White House, presided over by Justice Clarence Thomas. Barrett is expected to join her colleagues on the bench as early as Tuesday.

Trump nominated Barrett after Ginsburg, a liberal stalwart on the court, suddenly passed away from cancer last month. Democrats opposed any nomination on principle, arguing that the nomination should go to the winner of the upcoming November 3 election. Republicans responded that with both the White House and the Senate majority, they had every right to fill the seat, and that even if Trump loses he will still hold office through January.

Democrats have tried to block the nomination through procedural votes and boycotting the October 22 Judiciary Committee meeting, but ran out of options over the weekend, when Majority Leader Mitch McConnell (R-Kentucky) successfully held a vote to end debate.

Barrett had already been confirmed to the Seventh Circuit Court of Appeals, in a 55-43 vote in October 2017, when three Democrats voted to support her. She is Trump’s third justice on the Supreme Court, after Neil Gorsuch – appointed to replace the late Antonin Scalia in 2017 – and Brett Kavanaugh, who filled the seat left open by the retirement of Justice Anthony Kennedy in October 2018.

Gorsuch’s appointment was greeted bitterly by the Democrats, as Republicans had blocked President Barack Obama’s nomination of Merrick Garland to fill the seat left by Scalia’s sudden death. Kavanaugh’s confirmation was almost derailed by allegations of sexual misconduct that Democrats made public after his committee hearings were done, but which they could ultimately not prove. The bitter fight to confirm the justice led to Republicans gaining two seats in the Senate in the 2018 midterms.

Responding to Minority Leader Chuck Schumer (D-New York), who has repeatedly called Barrett’s confirmation “illegitimate,” McConnell said right before the floor vote that the US is a constitutional republic where “legitimacy does not flow from their feelings.”

While Joe Biden has denied wanting to “pack” the court – expand its size beyond nine – a number of prominent Democrats have called on their presidential candidate to do just that should he win next week.