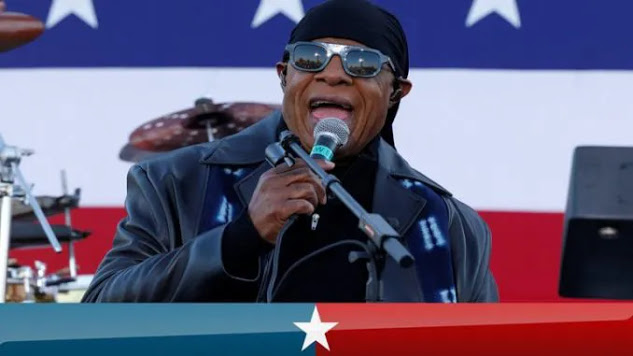 Singer Stevie Wonder called for reparations for black Americans while performing at a Joe Biden rally in Detroit on Saturday.

The pop icon whose estimated net worth exceeds $100 million, was a guest performer at the drive-in Biden rally on Belle Isle.

70 year old Stevie Wonder, who was born in Saginaw, Michigan and grew up in Detroit has become the latest celebrity to help the Biden-Harris ticket’s effort to flip Michigan blue.

Breitbart reports: At one point during the rally, the singer voiced his demand for reparations. “I know Joe Biden will do it. Give us reparations! For the work that we’ve all done for the last 400 years — unpaid,” the pop star said.

“I know Joe Biden will do it. Give us reparations!” Stevie Wonder calls for reparations at today’s Biden rally in Detroit #Biden2020 #Obama #Detroit pic.twitter.com/DKoIiqshNv

Joe Biden has been non-committal when it comes to slavery reparations. Earlier this year, he voiced support for a study on the feasibility of direct cash payments to black Americans.

Wonder also demanded that Michiganders “vote justice in and injustice out.”

Stevie Wonder is here to campaign for the Biden-Harris ticket as well #Biden2020 #Obama #Detroit pic.twitter.com/Lt21wfV3pe

The Biden campaign has drawn on celebrity Michigan natives including Lizzo and Jeff Daniels to help get out the vote. Lizzo has campaigned for Biden in her native Detroit, while Daniels provided a voice-over for an anti-Trump commercial in which thee actor said he is voting for Biden.

President Donald Trump narrowly won Michigan over Hillary Clinton in 2016 by a margin of just over 10,000 votes.