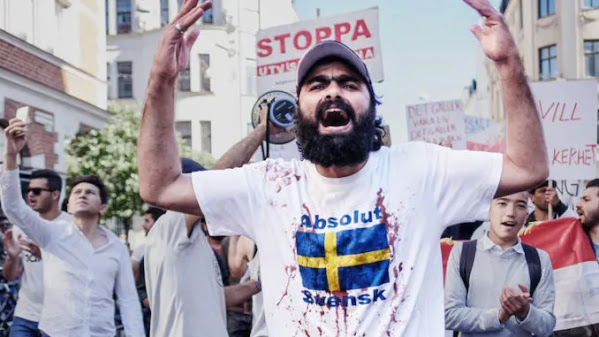 After years of being an open-border sanctuary, Sweden has performed a massive U-turn on its attitude towards immigration after determining that “integration is no longer successful.”

The Scandinavian country has agreed to continue providing material aid to Greece but has stated it will no longer accept any refugees from the burned Moria camp in Lesbos or other Greek islands.

Sweden joins the ranks of Austria, Hungary, Poland, Czechia, and Slovakia in refusing to accept migrants from the camp.

Rmx.news reports: It is not clear whether the change of course in asylum policy concerns only the problem of relocating the 12,500 people from the destroyed Greek Moria camp, or whether Sweden is changing its approach to migration in general. The fact is, however, that the topic of migration dominated the 2018 Swedish elections, and Prime Minister Stefan Löfven is now under pressure. As Swedish media points out, his minority government coalition with the Green Party is the weakest in 70 years.

In 2015, Sweden recorded over 160,000 asylum applications, which was the highest number per capita in Europe. Sweden, along with Germany, was one of the most sought-after destinations for refugees. At the time, the country was proud of its liberal approach.

“My Europe does not build walls,” said Prime Minister Stefan Löfven at the time.

After five years, the country faces a dramatic increase in crime and failures in its integration efforts.

“If migration is so strong that integration is no longer successful, we risk further problems,” said Prime Minister Löfven last week.

Sweden struggles with the spread of gang-related crime in socially disadvantaged suburbs. For example, since the beginning of this year, 27 people have died during the shootings between criminal organizations. Almost all the victims were young men and members of migrant gangs, wrote the German newspaper Frankfurter Rundschau daily, which writes that the growth in clan violence has “shifted the discourse in the country”.

Deputy Police President Mats Löfving’s televized appearance dropped like a bomb in Sweden last month where he described a “systemic threat” of migrant gang clans in the country, with his interview hotly debated for weeks.

“These clans have come to Sweden solely to organize crime. They work to create power, they have a great capacity for violence, and they want to make money. And they do that through drug crimes, violent crimes, and extortion,” said Löfving, who made remarks during an interview on Ekot’s Saturday program on Swedish Radio.

And despite a welcoming attitude in 2015, the attitudes of Swedes are also changing, with a majority of them saying they want to reduce immigration, according to polling research.

Furthermore, the number of sexually motivated attacks is also on the rise, and “no-go” zones, which are areas barricaded off to civil or military authorities, are expanding.

Sweden has some of the worst statistics on rape in Europe with 73 per 100,000 citizens reporting a case of rape in 2017, representing a 24 percent increase in the last decade.

In contrast, Hungary and Poland, both countries which have been opposed to mass migration, have seen dramatically lower rape rates in the country, even when accounting for different methods of reporting. Hungary’s rate is 3.9 per 100,000 citizens reporting the crime of rape in the country, while Poland’s rate is even lower, at 3.2 per 100,000.

The fight against criminal gangs is facing severe difficulties, and according to Swedish sociologist Göran Adamson, 58 percent of the perpetrators of crimes committed in 2017 were migrants.

“When the migration is to such an extent that integration no longer works, it is clear that there will be social tensions in society, and that is not good,” said Löfven in a television interview.

His words are being seen as a sign that serious mistakes have been made in Swedish integration efforts.