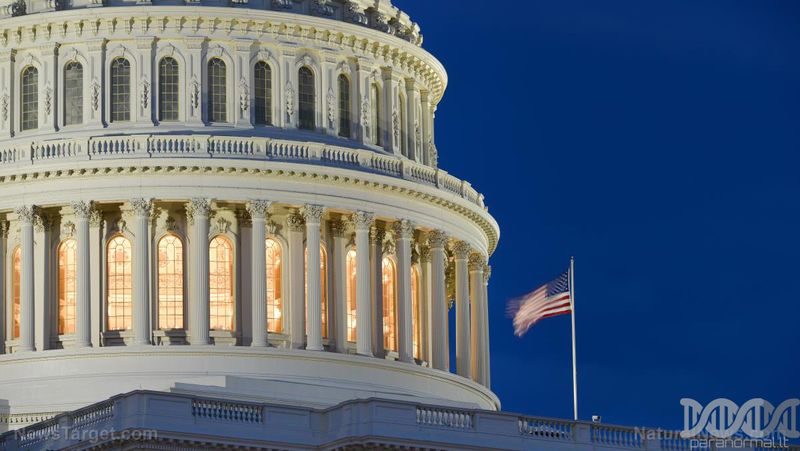 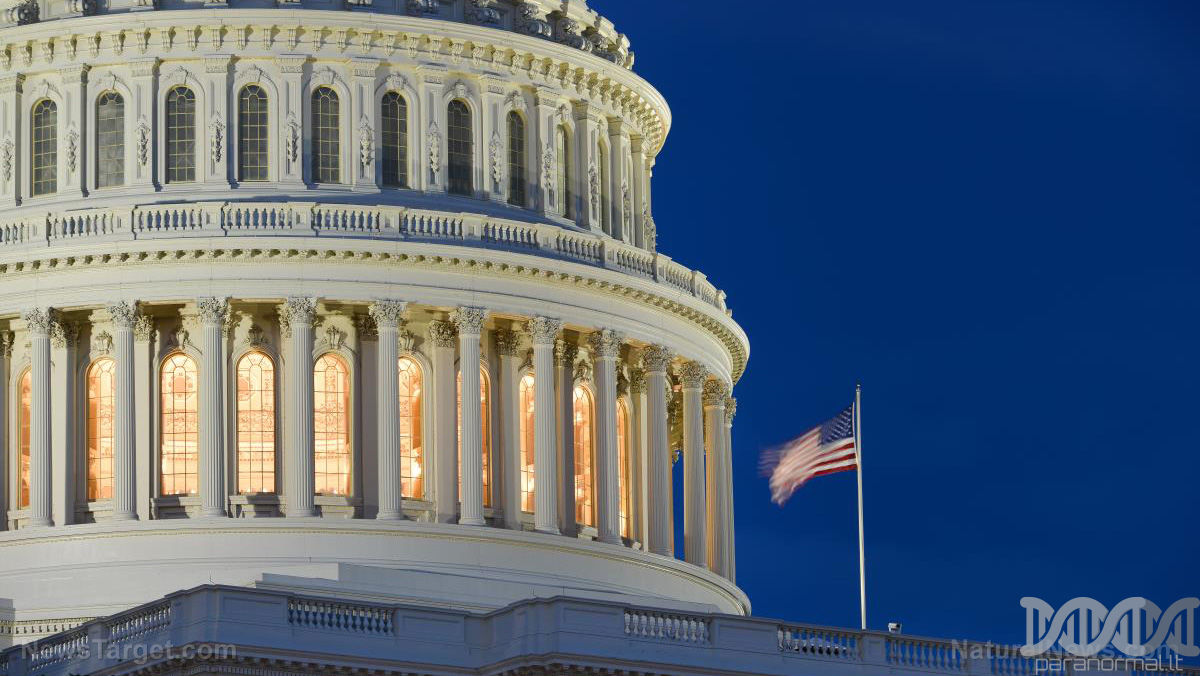 (Paranormal) Following yesterday’s false flag “storming” of the Capitol Building — staged by left-wing Antifa / BLM instigators who dressed up as MAGA supporters — we witnessed the final act of betrayal against our constitutional republic as members of Congress flipped against truth and voted to accept the fraudulent Biden electors, making Joe Biden the “president-elect.”

The false flag storming of the Capitol Building is being used by the media and members of Congress to whitewash all the overwhelming evidence of election fraud in the general election. Suddenly in the media narrative, even the possibility of vote fraud by the Biden camp no longer matters because some people “stormed” the Capitol Building and that was scary.

Patrick Byrne has retweeted this video revealing Capitol Police openly directing Antifa / BLM “actors” (dressed as MAGA patriots) to invade certain sections of the Capitol Building. Byrne calls it, “The moment we realized that this is a staged psyop…”

That same media narrative demands that we forget the radical Left’s storming of the Capitol Building during Kavanaugh’s SCOTUS hearing, of course. You’re also not supposed to remember the many months of extreme violence and domestic terrorism of the radical Left as they burned cities, assaulted federal officers and set fire to police cars and government buildings throughout much of 2020.

The following video gives you a taste of how the media covered Leftists “storming” the Capitol during the Kavanaugh hearings:

Trump did NOT concede, and the “transition of power” doesn’t necessarily mean a transition to Biden

Under the cover of night, the treasonous US Congress voted to install CCP puppet Joe Biden into the White House, confirming his fraudulent slate of electors as accepted. A few hours later, Trump issued a statement about a “transition of power.” Here it is:

Even though I totally disagree with the outcome of the election, and the facts bear me out, nevertheless there will be an orderly transition on January 20th. I have always said we would continue our fight to ensure that only legal votes were counted. While this represents the end of the greatest first term in presidential history, it’s only the beginning of our fight to Make America Great Again!

This statement is being widely interpreted by the media to be a concession statement from the president. However, it is no such thing.

Trump did not concede at all. He did not congratulate Joe Biden and he did not say he would leave the White House.

When he says, “the end of the greatest first term,” that makes perfect sense, since Trump’s second term would begin on January 20th. So his first term is ending.

More importantly, Trump did not specify what the “orderly transition” means. He didn’t say there would be a transition to Biden being installed as president. He might be referring to the transition of America away from the tyranny of the deep state and the return of power to the People.

In fact, Trump’s statement seems to be designed to disarm those calling for his immediate removal under the 25th Amendment so that Trump can continue to work the military solution that would seek mass arrests of the traitors who attempted to pull off their criminal coup against America.

“Many traitors will be arrested & jailed over the next several days,” wrote attorney Lin Wood in a Parler tweet he issued during the early morning hours, after Congress completed its final act of betrayal of America.

He also retweeted another statement from Parler user @StormIsUponUs who explained, “Sleep well tonight patriots. The constitutional process played out till the end, and Trump didn’t interfere once. You are going to love how this movie ends.”

Yesterday Trump released a video that contained a “proclamation to disperse.” This was the video in which he told everybody to “go home in peace.”

This statement, it turns out, is a necessary step to invoke the militia or US armed forces to defend the republic.

10 USC Section 254 is called “Proclamation to disperse” and it explains:

Whenever the President considers it necessary to use the militia or the armed forces under this chapter, he shall, by proclamation, immediately order the insurgents to disperse and retire peaceably to their abodes within a limited time.

That is exactly what Trump did yesterday.

He then boarded Air Force One and flew to a military base in Texas, where he could be safe from any kinetic coup attempt in the swamp of Washington D.C. This was tweeted out by CodeMonkeyZ, citing MonkeyWerx:

Now, Trump is likely preparing to invoke the Insurrection Act or some other form of military authority to conduct mass arrests of the traitors who have betrayed this nation (which now includes VP Mike Pence, Lindsay Graham, Mitch McConnell and many others).

Understand that Trump didn’t know for sure who the traitors were until about 3 a.m. this morning, because that’s when the final votes came down in Congress, affirming the complete list of US Senators and House members who are complicit in the criminal coup against the United States of America.

Naturally every single Democrat in Congress was confirmed as a traitor. But most members of the GOP also joined the “traitor” list. The Gateway Pundit published the full list of treasonous GOP members this morning, all of whom voted against the objections to the Biden slate of electors:

Only now does Trump have the final arrest list of treasonous actors who betrayed America in our final hour. In fact, there’s no way Trump could have known all this unless the scenario was allowed to run its course.

Most Americans, for example, would never have believed that VP Mike Pence — an evangelical Christian — would have betrayed the nation in its most critical moment. Now, Lin Wood’s statements about Mike Pence being linked to pedophilia, Jeffrey Epstein and child trafficking operations suddenly make sense to anyone paying attention. Pence was controlled opposition from the very start, and Pence was the source of the leaks from the White House over the last four years. Globalists have had Pence over a barrel from day one.

Will Trump pull the trigger?

The only question now is: Will Trump pull the trigger and unleash the military arrests?

Note that Trump does not have the loyalty of the US Army, nor of many top generals. He doesn’t need that. Trump has Chris Miller at the DoD, and he has the loyalty of Special Operations Forces (SOF) command, along with Space Force, the Air Force and most of the US Marines. That’s all he needs.

Trump must now activate a military option to defend the republic, either via the Insurrection Act or other military authority. He has put everything in place for this very moment. Importantly, Trump patiently attempted to defend the Republic through the courts and through Congress, watching as each option was exhausted due to extreme corruption, criminality and fraud throughout the system. (Even SCOTUS was compromised in the same way Pence has been compromised: Blackmail, extortion and pedophilia.)

Trump had decided early on that he would not act until every civil option was exhausted. As of 3 a.m. this morning, that waypoint has now been reached. There are two options remaining for defending America now:

As I have stated in my Situation Update podcasts, we urge Trump to choose option #1 so that option #2 doesn’t get spontaneously activated across the country, likely plunging the nation into hot civil war.

The window of opportunity for Trump to invoke his military authority option is very narrow: Perhaps as small as 72 hours from now.

If we do not see action from Trump in the next 72 hours, only then could we conclude he has likely thrown in the towel. Until then, we must watch carefully and try to discern what’s actually taking place behind the scenes to defend this nation.

Trump has not conceded. America is not yet lost, although it is admittedly very, very close to that tipping point.

But sometimes in history, the most dramatic outcomes of truth and light can only come after the most dire suffering through darkness. Today is America’s darkest day, but it may yet be followed by victory.

The GOP is finished

One final thought for this article: The GOP is finished. 80+ million Trump supporters will no longer support any GOP candidate from this day forward. We learned last night that the GOP will betray America when it counts, and from this day forward, we denounce the GOP and urge all readers and supporters to join us in that denouncement.

Never vote for a GOP candidate ever again, unless their name is “Trump.”

Never believe anything a GOP weasel promises in any election speech or campaign ad.

There are a few exceptions to the GOP treason, such as heroes Matt Gaetz, Jim Jordan, Josh Hawley and a few others, but last night showed us that when it really counts for our country, the GOP will betray us all when it is politically convenient for them to do so.

The GOP as a party is just as dead now as the DNC.

The only question remaining is whether the United States of America is dead as well, and we won’t know the answer for sure until we see what Trump does over the next several days.