Trump Says He Will Nominate A Woman For Supreme Court Vacancy 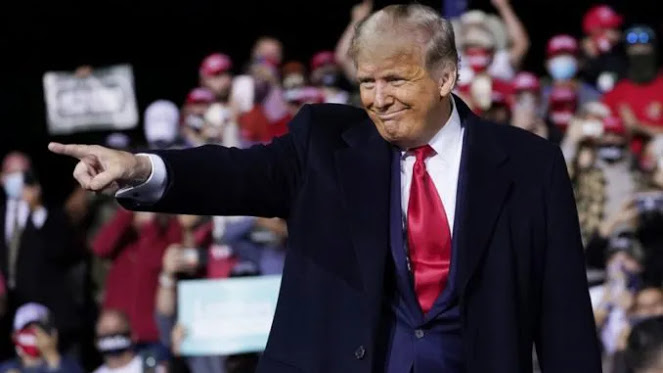 President Trump said he planned to nominate a candidate to replace Ruth Bader Ginsburg as early as next week – and it will be a woman.

Trump said “I will be putting forth a nominee this week, it will be a woman’, adding that his pick would be a “very talented, very brilliant woman”

According to the Mail Online, as the president left the White House for a campaign rally in North Carolina, he identified two women as potential front runners: Amy Coney Barrett, 48, of the Chicago-based 7th Circuit and Barbara Lagoa, 52, of the Atlanta-based 11th Circuit as possible nominees.

Fox News reports: The commander-in-chief opened his rally in Fayetteville, N.C., by paying tribute to the late justice, saying “you may disagree with her, but she was a tremendous inspiration to a number of people, I say all Americans.”

Trump told reporters before boarding Air Force One to North Carolina that his pick would likely be announced next week.

Trump said the current situation is different than in February 2016 when a seat was vacated by late Justice Antonin Scalia. “That’s called the consequences of losing an election,” the president said.

He noted her close relationship with late Justice Antonin Scalia, which he called a “powerful reminder we can disagree on fundamental issues while treating each other with decency and respect.”

Trump also asserted his right to nominate a new justice before the election. “Article II of the Constitution says the president shall nominate justices of the Supreme Court. I don’t think it can be any more clear, can it?”

A chant broke out among the crowd multiple times throughout the night: “Fill that seat, fill that seat.”

“It says the president, we’re supposed to fill the seat. That’s what we’re going to do.”

Trump also told the crowd he would now consider his rallies protests. “This isn’t a rally. From now on it’s called a protest,” he said. “Protest against stupidity.”

Trump said that a Supreme Court seat was vacated during an election year or prior to inauguration 29 times throughout history. “Every sitting president made a nomination,” he said.

President Obama nominated Merrick Garland for the seat, but Senate Majority Leader Mitch McConnell, R-Ky., in 2016 used his caucus’ numbers to hold the seat open until after the election.

Of Sen. Susan Collins’ statement that the nominee should be voted on after the election, Trump said before the rally, “I totally disagree.” “We have an obligation, we won,” he said. “We’re here now. Right now we’re here and we have an obligation to the voters.”