Trump Vows To Expose the Truth About UFO’s 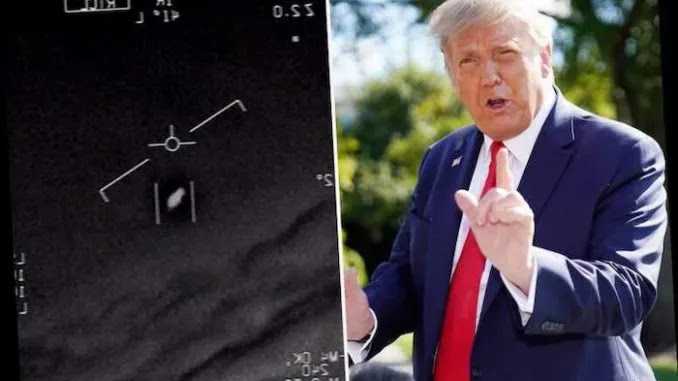 President Trump has vowed to expose the truth about the existence of UFOs to the public, in an explosive interview on Sunday.

“Mr. President, as we wrap up here, are there UFOs?” Bartiromo asked.

“Well I’m gonna have to check on that,” Trump replied. “I mean, I’ve heard that. I heard that two days ago, so I’ll check on that. I’ll take a good, strong look at that.”

BARTIROMO: "Mr President, are there UFOs?"

TRUMP: "Well, I'm gonna have to check on that ... I will tell you this, we have now created a military the likes of which we've never had before, in terms of equipment." #wut pic.twitter.com/JqecgqE7FQ

Insider.com reports: The president went on to discuss the military and later reiterated his promise to “check on” UFOs.

“I will tell you this,” he said when asked about the UAPTF by Bartiromo. “We now have created a military, the likes of which we’ve never had before in terms of equipment. The equipment that we have, the weapons that we have — and hopefully, hope to God we never have to use them.”

“Russia, China, they’re all envious of what we’ve had,” Trump added. “All built in the USA. We’ve rebuilt it, $2.5 trillion. As far as the other question, I’ll check on it. I heard about it two days ago actually.”

Insider’s Haven Orecchio-Egresitz previously reported that “politicians and Pentagon officials have previously expressed concerns about the appearance of ‘unidentified aerial phenomenon’flying over US military bases.”

“In April, the Pentagon declassified three videos of ‘unidentified aerial phenomena,'” Orecchio-Egresitz wrote. “The next month, the Navy released several incident reports from encounters with unidentified flying objects (UFOs) — a generic term for any aerospace asset that is unidentifiable, rather than confirmation as an actual aerial object piloted by extraterrestrials.”

Trump has expressed skepticism when asked about UFOs in the past

In June 2019, Trump told ABC News that he had “one very brief meeting” to discuss US Navy reports of UFOs. At the time, he said he didn’t necessarily believe the reports, but wanted pilots to “think whatever they think.”

“I think it’s probably — I want them to think whatever they think,” Trump told George Stephanopoulos. “They do say, and I’ve seen, and I’ve read, and I’ve heard, and I did have one very brief meeting on it. But people are saying they’re seeing UFOs.”

“Do I believe it? Not particularly,” he added.