UK: Sex In Your House With Person From Another Household Is Illegal From Today 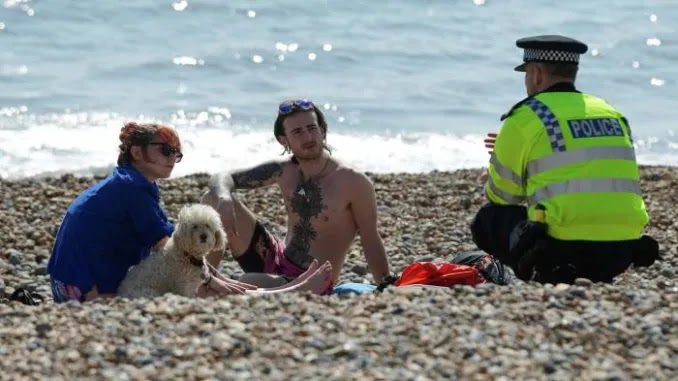 Having sex in your own house with someone from outside of your household is set to become illegal today in the United Kingdom today.

The British government is introducing new lockdown measures in England that prevent people from socializing (or gathering) with one person from outside of their household in a private space, including private property.

Mirror report: Up until now the person visiting a house for sex would have been the one in breach of the measures. But now both people would technically be able to be prosecuted under the law, with Amendment Regulations being introduced in Parliament on Monday.

For those couples looking for a workaround, having sex in a public place is already illegal.

The new legislation explicitly bans being inside the house in a gathering of more than one person without a reasonable excuse.

People who may be deemed to have a reasonable excuse are sports professionals, people attending funerals, vulnerable persons fleeing a risk of violence, carers and those with unavoidable work commitments.

Meanwhile athletes are able to stay in a different location to their own residence if they are training for a competition – and this applies to an elite athlete, a coach and parent.

Others who are exceptions to the new rule are those moving house and people who need to obtain medical assistance.

The UK has seen a shocking rise in domestic violence crimes during the lockdown and the new measures take this onboard permitting anyone who must escape a risk of harm to sleep at someone’s house.

Police have seen an increase in reports of domestic abuse while calls to a 24-hour helpline for victims are also significantly up.

Writing on Twitter, Adam Wagner, a human rights barrister at Doughty Street, said that the police will no longer have powers to challenge the public carrying out activities outside of the home.

He wrote: “To be clear – from tomorrow – the police can no longer get involved with why you are outside of the place you are living.

The Government has faced criticism after ‘ignoring‘ vulnerable persons like the elderly in lockdown changes.

People who have been shielding for weeks to protect themselves from coronavirus will hopefully get more tailored advice in the future, a Cabinet minister and senior medic have said.

The Government has pledged to review guidelines on the clinically extremely vulnerable as part of each review of social distancing measures for the wider population.

More than two million in England are said to be isolating alone with many feeling forgotten. Source