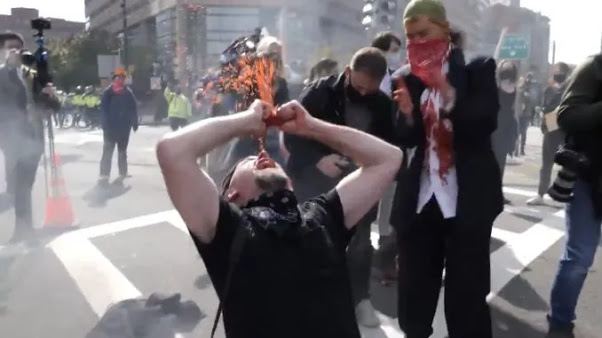 Antifa radicals conducted a Satanic occult ritual on the streets of Boston, Massachusetts this weekend as they burned American flags, chanted praises to “the chaos god” and ate a bloody heart symbolic of the President of the United States.

The Antifa occult gathering was organized to supposedly counter a protest against left-wing violence also held in Boston on the weekend.

Video of the disturbing scene posted to Twitter, shows a group of sign and bullhorn-wielding Antifa radicals gathered in a city street in Boston letting out demonic yells and shrieks as a member of the group begins to suck the blood out of a heart meant to symbolize President Trump.

As an American flag burns beneath the feet of the heart-eating Antifa member, he falls to his knees and rips the heart in half, reveling as blood explodes onto his face amidst shouts of “I’m on fire!” before another member appeals through a bullhorn, “to the chaos goddess, hear our cries.”

Antifa burn the US flag and eat a heart symbolic of the President during an anti-democrat violence protest in #Boston #Massachusetts on 10.18.2020 pic.twitter.com/eLdOW8YNyg

NationalFile report: After rolling around on the ground in ecstasy, the heart-eater is joined by fellow AntiFa radicals in chants of “praise to the chaos god” and “F*** Trump” while running laps around a smoldering American flag.

As left-wing political violence has skyrocketed over President Trump’s first term in office, Black Lives Matter and AntiFa-aligned radicals have turned increasingly friendly towards the occult and increasingly hostile towards Christianity.

Over recent months, the groups’ left-wing extremists have attacked a number of churches and Christian idols, including the famed St. John’s Church in Washington, D.C. As previously reported by National File, in Troy, New York Black Lives Matter and AntiFa radicals stormed services at the Grace Baptist Church this summer, going as far as to physically attack parishioners and their children.

Back in 2018, a group of “anti-fascist witches” organized in Brooklyn, New York to put a “hex” on then-Supreme Court nominee Brett Kavanaugh, though it wasn’t very effective, as Kavanaugh was later confirmed to the nation’s high court.