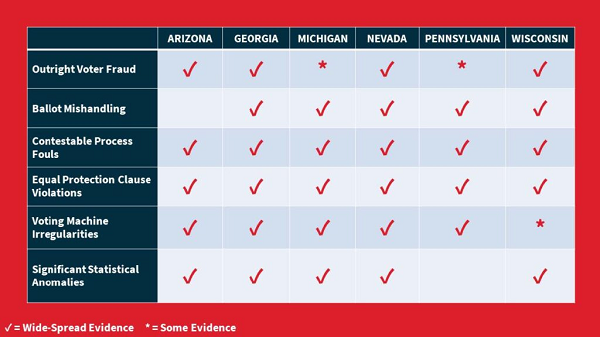 (Paranormal) Election fraud witnesses, legal teams, cyber-warfare operations, data analysts, independent journalists and other American patriots have fought relentlessly to present the truth about coordinated election fraud, to protect the integrity of the electoral process and to defend the United States against foreign and domestic enemies.

The Democrats and their Big Tech, Big Media and foreign allies have claimed victory in the 2020 Presidential election for nearly two months, but now they must face the reality of simple mathematics.

Together, the two candidate’s combined vote total exceeds the total number of registered voters who cast their ballot by a whopping 13 million votes! This simple mathematical anomaly was brought forward by Bill Binney, of US Intel Fame. He pointed out that more people voted in the 2020 election nation-wide than were eligible to vote. If Trump’s uncontested total of 74 million votes is true, then there are only enough votes left to give Biden 66.344 million votes. Simple math shows that Donald Trump won in a landslide!

It’s time for Joe Biden and the Democrats to prove how they received an excess of 13 million votes! Were the identities of registered voters stolen and used to create massive amounts of mail-in ballots? How many dead people’s identities were stolen to allow for early and late mail-in voting? How much change of address ID fraud was carried out during the election? In other words, how many people were allowed to vote twice and were their identities harvested in their home state to push more mail-in ballots through the vote tabulation software? How many fraudulent votes were stuffed into drop off ballot boxes, with no accountability or real-life verification? (Related: White House trade adviser Navarro’s bombshell report proves (again) Trump WON the election.)

Biden won a record low 17 percent of counties and lost historic levels of Black and Hispanic support (compared to Democrat candidates in the past). He lost 18/19 Bellwether counties and was destroyed in states that are usually too close to call (Florida, Ohio and Iowa), but somehow, he managed to come up with a surplus of 13 some million votes that exceeds the total number of registered voters who actually voted! Republicans also gained 27 out of 27 “toss up” Congressional seats during the 2020 election, demolishing the down-ticket Democrats across the board. Why were millions of excess ballots only filled out for Biden, and the down-ballot Democrat candidates disregarded? Why are eye-witnesses speaking out about the post-election mail-in ballot hauls that didn’t even have a crease and were obviously never handled by voters in the first place.

The fraud is so blatant, so arrogant and so obvious. It’s time for the Biden legal team and the Democrats to prove how they received historic vote totals when there weren’t enough registered voters to account for in the astronomical vote totals that Biden received in certain conspicuous counties post election. It seems apparent that a select number of counties throughout the country were targeted to carry out massive fraud. Perhaps the election officials in these democrat strongholds were so caught up in removing Trump from office that they would join in an effort to wage war against the country and its election system. Maybe they were threatened by the mobs that took to America’s streets in 2020. Maybe they were coerced by people in positions of power and influence.

The question now: Who is courageous enough to stop this mob rule? Are the courts refusing to hear the merits of the fraud out of fear that the violent left-wing mobs will threaten their lives, as they have done all year long?