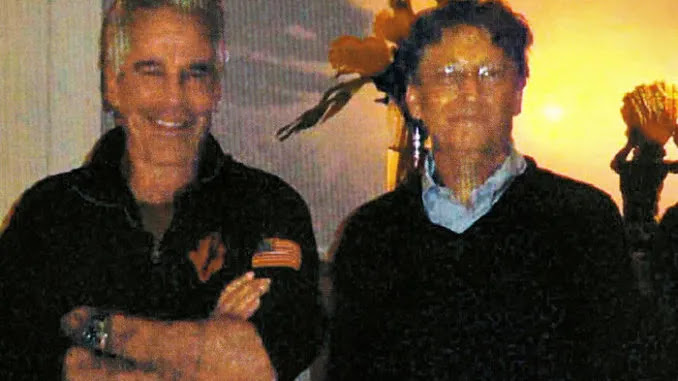 PEDOPHILE BILLIONAIRE JEFFREY EPSTEIN WAS PRESENT AT A MEETING IN STRASBOURG IN 2013 WITH THE THEN CHAIRMAN OF THE NOBEL COMMITTEE AND BILLIONAIRE BILL GATES.

Former Nobel Committee chair Thorbjørn Jagland denied having met Jeffrey Epstein but now he confirmed that he entertained Epstein and billionaire Bill Gates at his Strasbourg residence in 2013, according to a new report out of Norway.

Gates denied having a relationship with Epstein until it was proven to be categorically false.

Jagland gave the Nobel Peace Prize to Barack Obama in 2009, just eight months after he took over the Nobel Committee.

Thegatewaypundit.com reports: DNMagasinet released a shocking report on Friday where they uncovered that Jeffrey Epstein was present at a meeting in Strasbourg in 2013 with the then Chairman of the Nobel Committee and billionaire Bill Gates.

According to the Norwegian newspaper,

After several inquiries this last week regarding new information about the meeting, Jagland confirmed that Gates and Epstein attended a meeting at his residence in March 2013, at an official meeting. According to him, Gates and Epstein arrived together.

December 2019: Berit Reiss-Andersen, chair of the Nobel Committee, had a question for the members of the committee. Queried by the Norwegian business daily DN, she asked whether they had ever had contact with Jeffrey Epstein, the convicted sex offender and well-connected financier.

Former chair Thorbjørn Jagland, by now a regular member of the committee, was among those answering no.

It turns out the answer was yes.

Not only did Jagland meet Epstein, he hosted him at his lavish residence in Strasbourg, France. At the time, Jagland was the sitting chair of the committee, which awards the prestigious Nobel Peace Prize. Also present: a philanthropist touted as a possible Prize recipient.

As the Secretary General of the Council of Europe, Jagland had his own residence, able to host several hundred guests. On the afternoon of March 27, 2013, Jagland hosted a small but exclusive group of very famous people.

One of those attending was Bill Gates, at the time the second-wealthiest man in the world and head of the largest charitable foundation in the world. Since leaving Microsoft a few years earlier, Gates had become a dedicated philanthropist. Having invested heavily to eradicate polio, he was among those mentioned as possible candidates for the Nobel Peace Prize.

Also present were representatives of the think tank International Peace Institute (IPI), who later that year partnered with Gates’ foundation in the fight against polio.

In addition to Gates and his assistants, another financier was also present. A person well-known for his network of powerful people and accused of participating in trafficking and sexual abuse.

A convicted sex offender, why was Jeffrey Epstein present in Strasbourg?

According to the sources, Gates and his assistants were already present when the representatives of IPI arrived. Epstein, who knew Gates, was the person that introduced the billionaire to IPI.

The meeting, where IPI introduced Gates to a polio eradication project, was to be very successful. Later the same year, Gates’ foundation granted IPI 2.5 million dollar. Since then, an addition 6 million dollars has followed, according to the foundation. The most recent grant was earlier this year, with an additional 250,000 dollars.

Despite Epstein pleading guilty in 2008 to charges of soliciting a prostitute, with a minor, as well as paying compensation to a number of women, Epstein was in no time back in the top circles around the globe.

According to the New York Times, Gates and Epstein met many times:

Jeffrey Epstein, the convicted sex offender who committed suicide in prison, managed to lure an astonishing array of rich, powerful and famous men into his orbit.

Few, though, compared in prestige and power to the world’s second-richest person, a brilliant and intensely private luminary: Bill Gates. And unlike many others, Mr. Gates started the relationship after Mr. Epstein was convicted of sex crimes.

Mr. Gates, the Microsoft co-founder, whose $100 billion-plus fortune has endowed the world’s largest charitable organization, has done his best to minimize his connections to Mr. Epstein. “I didn’t have any business relationship or friendship with him,” he told The Wall Street Journal last month.

In fact, beginning in 2011, Mr. Gates met with Mr. Epstein on numerous occasions — including at least three times at Mr. Epstein’s palatial Manhattan townhouse, and at least once staying late into the night, according to interviews with more than a dozen people familiar with the relationship, as well as documents reviewed by The New York Times.

There is clearly more to this story – due to Epstein’s death we may never know what the entire story is.