Cardi B: Trump Supporters With ‘Big Ass Trucks’ Are EVERYWHERE, ‘I Don’t Like This Sh*t!’ 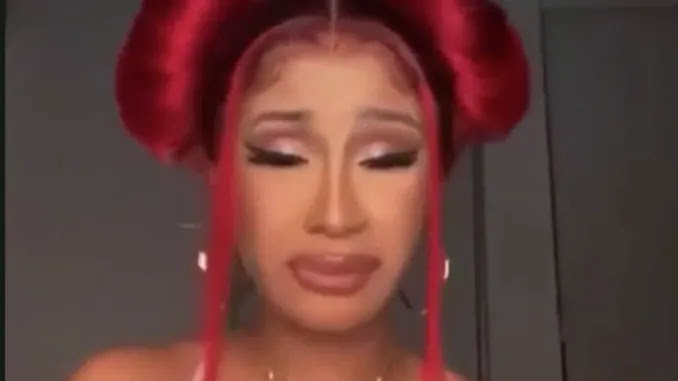 Rapper and Joe Biden cheerleader Cardi B was terrified when she recently ventured into the real world and found there are Trump supporters everywhere. The Hollywood rapper expressed her horror at Trump supporter’s “big ass trucks”, declaring “I don’t like this shit!”

Cardi B posted a series of clips to her Instagram Stories on Saturday in which she livestreamed herself driving past huge crowds of Trump fans wearing MAGA hats and waving American flags.

Of course, there was not a Biden supporter in sight.

In another clip, she said: “Trump supporters are everywhere, I’m scared. I don’t like it, with their big ass trucks.”

Cardi B stunned by trump supporters moments prior to offset alleged arrest pic.twitter.com/IQEzJDcLtl

Breitbart report: Cardi B’s Instagram rants are believed to have taken place shortly before or after police officers detained her husband, the rapper known as Offset, after someone inside his vehicle allegedly pointed a gun at Trump supporters who had just participated in a rally in Beverly Hills.

Offset was detained in Los Angeles while on Instagram Live after run-in with Trump supporters. pic.twitter.com/YbRR8WNIXg

Cardi B reportedly pleaded with the officers to release her husband.

The Beverly Hills Police Department released a statement late Saturday, saying that they had arrested one of the passengers in the vehicle for pointing the weapon. The individual was identified as Marcelo Almanzar, 20, who faces charges of carrying a concealed weapon and carrying a loaded firearm in public. The Beverly Hills PD said Offset wasn’t arrested.

Cardi B has actively campaigned for Joe Biden, conducting in a lengthy interview with the presidential hopeful for Elle magazine in August in which she demanded free college tuition and health insurance. The “WAP” singer recently threw herself a lavish birthday celebration in Las Vegas where she was seen partying without wearing a mask.