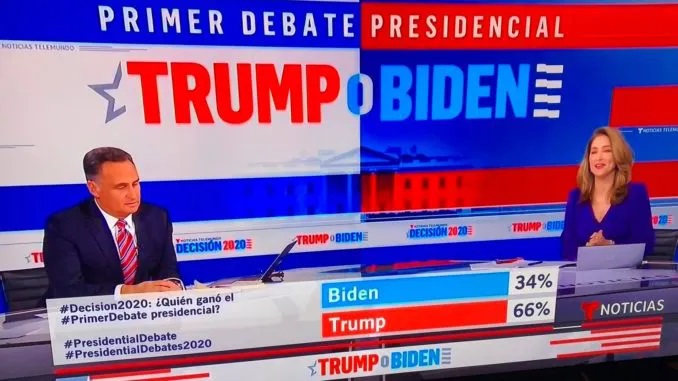 Following the debate on Tuesday night Hispanic voters watching Telemundo OVERWHELMINGLY gave the debate to President Trump by two-to-one, or 66% to 34%.

Such a huge result is just stunning and a major turnaround from the last election result. Hillary won the Hispanic vote 66 to 34 percent in the 2016 election.

Latino voters have traditionally been taken for granted by the Democrat Party but Trump’s debate performance on Tuesday appears to be swaying some voters in his direction, which would sound the death knell for Biden’s faltering campaign.

Trump has touted his popularity with the Latino voting demographic. “We’ve done really well with Hispanics,” Trump said during a July roundtable meeting with leaders from the Latino community. “We like them, they like me, and we’ve helped them a lot with the jobs. Whether it’s jobs, education, or so many other things, it’s been really good.”

Biden drew widespread criticism for his appearance at the Hispanic Heritage Month commemoration ceremony where he played the hit Spanish-language pop song “Despacito” from his phone.

“I’ll tell you what,” Biden said. “If I had the talent of any one of these people, I’d be elected president by acclamation.”

Many observers considered Biden’s “Despacito” moment to be pandering and deeply cringeworthy.

Latinos for Trump used the embarrassing moment in an advertisement that featured the notoriously handsy Joe Biden leaning in close to kiss younger women.

The English translation of some the song’s lyrics were shown at the bottom of the footage: “Want to slowly breathe on your neck/Let me whisper in your ear.“

Actually, "Despacito" is the perfect song for Joe Biden. pic.twitter.com/Chq90Hm49r